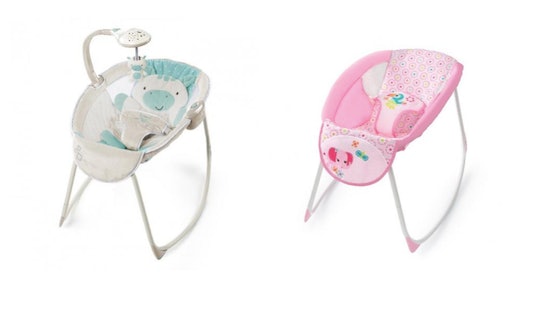 "Infant fatalities have occurred in the Rocking Sleepers, after the infants rolled from their back to their stomach while unrestrained, or under other circumstances," the CPSC's recall notice on April 26 states. According to CNN, the recall comes after five infant deaths occurred in the sleepers.

The recall includes approximately 694,000 sleepers that were sold under names including Bright Starts, Ingenuity, as well as Disney Baby, as CNN reported. Kids2 may also be known to some shoppers as Kid II, as seen on the company's Facebook page.

The sleepers were sold for about $40 to $80 at retailers nationwide, online and in stores including Walmart, Target, and Toys "R" Us from March 2019 through today, April 26, 2019, according to the CPSC.

Kids2 did not immediately respond to Romper's request for further comment on the recall, but the company issued a statement on its Facebook page alerting its customers to it. "Our number one priority is the safety and well-being of the families who love our brands and use our products," the statement began. "We are devastated by the loss of any child and our hearts go out to the families affected."

"Today we are announcing a voluntary recall of all models of Kids II Rocking Sleepers," the statement continued, adding that all consumers should "stop using any Kids II Rocking Sleeper product" and if you have questions about the recall, you can call 1-866-869-7954 or visit KidsII.com's recall page for more information.

"Sleep is a challenge that all babies and new parents face. We will continue to meet or exceed all industry standards, and we intend to lead the industry in product advancement that offer parents safe solution to their early parenting challenges," the company's statement concluded.

To see the full list of recalled sleepers, you can visit the CPSC's recall notice.

This recall comes two weeks after Fisher-Price recalled more than 4 million Rock 'n Play Sleepers due to several reports of infant deaths. At the time, Fisher-Price told Romper in a statement that the company the safety of its products, but "due to reported incidents in which the product was used contrary to the safety warnings and instructions, we have decided to conduct a voluntary recall of the Rock 'n Play Sleeper in partnership with the Consumer Product Safety Commission."

Ahead of that recall, the American Academy of Pediatrics (AAP) had called for a recall on the sleepers. In a statement, the AAP said that it "does not recommend inclined sleep products like the Rock ‘n Play, or any other products for sleep that require restraining a baby."

If parents have any concerns about the recall on Kids2's Rocking Sleepers, don't hesitate to reach out to the company.