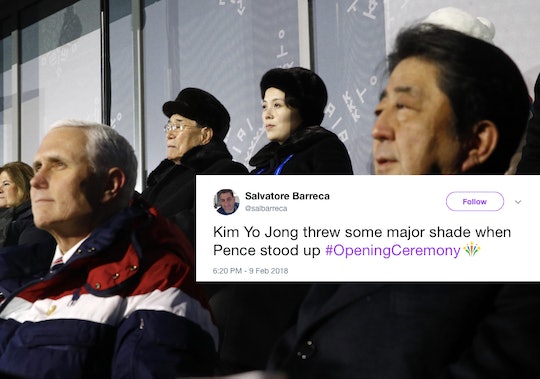 The Olympics are supposed to be about unity, togetherness, and a shared sense of friendly competition. But this year, during the 2018 Winter Games Opening Ceremonies, some shade was definitely thrown in a few directions. Take Kim Yo Jong looking at Mike Pence, for instance. The side-eye thrown in the vice president of the United States' direction was as obvious as it was uncomfortable, but, in good ol' social media fashion, Twitter was here for it.

Well, you have to, dear reader, because the shade throw in the vice president's direction as he waved at the United Sates Olympians was obvious, palpable, and not overlooked by Twitter. Here are just a few tweets that highlighted the tension between Pence and Kim Yo-jong.

It's, arguably, an odd position to be in, as a United States citizen watching the 2018 Winter Games and actually celebrating one world leader throwing major shade at our current vice president. Then again, when you look at some of the positions this current vice president holds, it's not only understandable, but almost necessary, to give credit where shade-throwing credit is due.

For example, Pence has been a believer of "conversion therapy," according to The New York Times. As the governor of Indiana, Pence advocated "diverting taxpayer dollars to so-called conversion therapy," as reported by Politico in Dec. of 2016; a decision that has been viewed in the "context with his long opposition to LGBT rights." And while North Korea is by no-means a beacon of human rights advocacy, by any means, there are 13 "out" LGBTQ athletes competing in total, across all the countries and teams, in the 2018 Winter Games. Two of those Olympians, Figure Skating's Adam Rippon and Freestyle Skiing's Gus Kenworthy, are bearing the United States flag. They are proud, out gay men, representing their country; a country that, currently, has a vice president that, in 2006, said, "being gay [is] a choice" and that "keeping gays from marrying was not discrimination, but an enforcement of 'God's idea'," according to TIME.

Which is why Kenworthy called Pence a “strange choice” and a “bad fit” to lead the U.S. delegation to the Olympics, according to The Hill. It's also why Rippon reportedly declined a meeting with Pence; a report Pence later called "fake news" in a tweet, which read:

@Adaripp I want you to know we are FOR YOU. Don’t let fake news distract you. I am proud of you and ALL OF OUR GREAT athletes and my only hope for you and all of #TeamUSA is to bring home the gold. Go get ‘em!

Regardless of how some Americans feel about Pence, it was clear how Kim Yo-jong felt about the vice president during the Opening Ceremonies: unimpressed. Here are a few more tweets, highlighting the undeniable shade thrown Pence's way:

There were more than a few memorable moments as the 2018 Winter Games kicked off in PyeongChang, and *the* side-eye is, without a doubt, one of them.