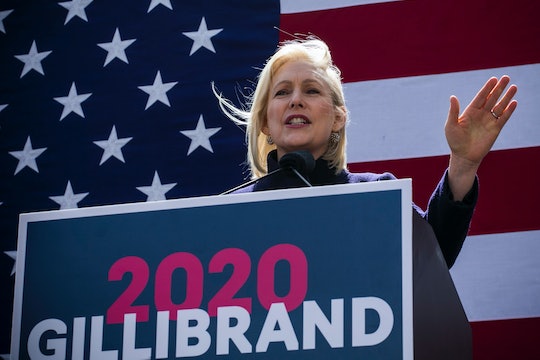 Kirsten Gillibrand's 2020 Platform Is All About American Parents

You may be so over politics at this point that you turn off the news if the words "presidential" or "election" are even used, but the most jaded American should be interested in the fact that seekers of national office are actually talking about stuff I've heard mentioned only in the carpool line until recently. Stuff like, what the heck happened to being able to afford a house, soccer, and braces like your parents generation? Well, Kirsten Gillibrand's platform for 2020 is about Americans being able to afford parenting, and this is important.

As Vox reported, Gillibrand, the influential New York Democratic Senator who's made no secret of her desire for higher office, is now upping the ante by specifying her platform for the super-crowded 2020 race.

Gratifyingly, she is focusing on a new freshly-launched series of actions she is calling the "Family Bill of Rights," which includes five core areas that affect parents and families. Things like making childcare more affordable; fighting the country's high maternal death rate, upping access to universal pre-K; making sure new families have baby supplies, and mandatory paid family leave, the website noted.

The senator, who unveiled her new plan on the website Medium, noted that in traveling for her campaign, she frequently meets young people who tell her they do not know how they will finance a family in today's U.S. If elected next year, Gillibrand, a mother of two herself, pledges to enact this bill within her first 100 days in the Oval Office.

This is totally my jam, even if Gillibrand didn't necessarily excite me before this. Of course, as soon as the senator went public with her proposal, skeptics might note that many of her ideas are shared by other candidates, such as Elizabeth Warren, Vox noted, or are merely well-intentioned, vague ideas without a lot of detail behind them (which to me sounds like it pertains to every politician, ever).

I say you have to start somewhere, so this is promising indeed. Of course, I'd like to hear politicians from all backgrounds acknowledging our country's strange fate as an international thought leader and seat of power that still lags behind many other countries in basics, like financing your kid's health care.

But hopefully, if this kind of conversation resonates with voters (and I can't imagine it wouldn't, especially with younger ones), Gillibrand's plan, which also focuses on training new OB/GYN's to offset shortages in caregivers and would expand the Child and Dependent Care Tax Credit to allow more citizens to use it, would be paid for by a tax on financial transactions that would create $777 billion in a decade, detailed New York magazine.

While her plan also includes reform for adoption policies and health care changes to include fertility treatment, the New York Times noted, the renewed abortion rights debate might make it the perfect time for Gillibrand to grow her political fame as the designated champion of women and women's rights. After all, the paper noted, as a candidate, she has lagged behind some in fundraising.

This sounds bad, but in a way, I don't really care which politician is doing better. I just want them all to get a clue and start talking about the stuff the families around me talk about every day, from college admission and tuition concerns to teacher burnout on down. If it matters to a household with young dependents, it really should matter to the rest of the country... and the people trying to run it.