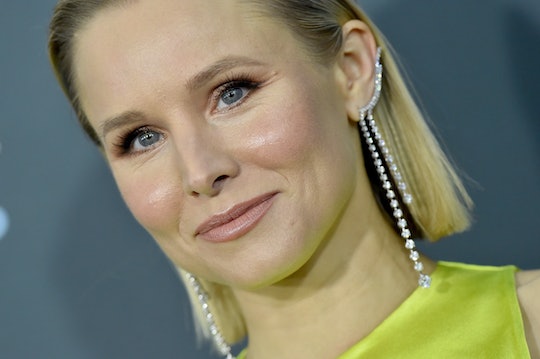 It's so adorable when kids try to do things for themselves, isn't it? Like when they want to zip up their own coat or get their own snack or wash their own hair. It's mostly great, except for when it isn't, like when Kristen Bell's daughter washed her hair with Vaseline. Oops.

The Frozen actress, who shares 6-year-old daughter Lincoln and 5-year-old daughter Delta with her husband Dax Shepard, recently shared on her Instagram Story that one of her daughters had decided to use some good old Vaseline as a substitute for shampoo and, well, it was proving a little stubborn to get out. The Good Place actress decided to look to other parents for removal tips, writing on her Instagram Story, "My daughter just washed her hair with Vaseline and I can’t get it out. Has this ever happened to anyone? Does anyone have any tips on how to get it out? ... I've washed it three times now and it's not getting any better."

Fortunately for Bell, her daughter wasn't the first child to come up with this idea. It seems there were plenty of parents who had a similar experience and they were more than happy to give her a hand in this department.

People took to Instagram and Twitter to try to save the day for Bell and her daughter, with loads of suggestions like, "You can remove Vaseline from your daughter’s hair by pouring Johnson & Johnson Baby Oil on her head and massaging it in to coat the hair. The oil emulsifies the Vaseline and you can then shampoo it out."

Eventually a consensus was apparently found. As Bell noted in an updated on her Instagram Story, "OK the consensus was dish soap and I appreciate that. I’m very grateful for you guys because I don’t know what I’m doing."

And then the good news came: "Situation handled!!!!" Bell wrote.

While Bell didn't say which one of her daughters reached for the Vaseline instead of shampoo, it would make sense if it was her daughter Lincoln. Back in May, the Veronica Mars star told People that she and her husband had shaved one side of Lincoln's head at her behest. Apparently her daughter just woke up one morning and said, "She just woke up one morning and was like, ‘I need to shave this whole side right here.’" So they did it.

Of course, the Vaseline hair washer could have been Delta, which means Bell has two hair rebels on her hands. Let the games begin.