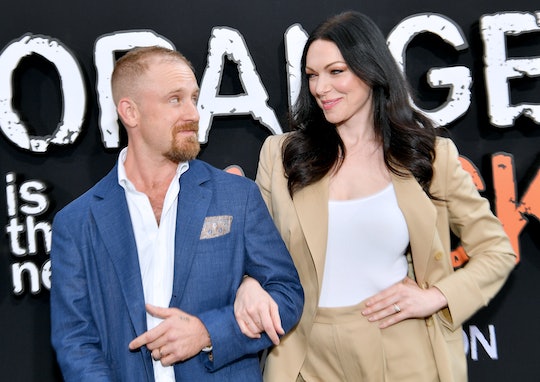 Congratulations are in order! On Wednesday, actress Laura Prepon announced that she gave birth to her second child with husband Ben Foster and shared on Instagram that she is "overwhelmed with gratitude." The Orange Is The New Black star revealed the exciting news with a sweet photo of her family's newest addition.

"Welcoming home our new bundle of love," Prepon, who announced she was pregnant with her second child back in October, captioned the photo of herself cuddling her newborn. "We are overwhelmed with gratitude."

The new mom of two did not share any further details about her newest addition, such as the baby's name or sex, but her fans have been eagerly waiting for Baby #2's arrival after Prepon announced on her YouTube channel this week that she would be going on maternity leave.

"This little bun in the oven is cooked, and will be joining us any day now," she shared in the video, adding that she'll be taking about "three to four weeks" off to enjoy this special time with her newborn baby.

Prepon and Foster, who are also parents to their 2-year-old daughter Ella, have been adamant about maintaining their family's privacy, which is why won't see Ella's face in the actress' Instagram photos, for example. Prepon has, however, opened up about aspects of her pregnancy; in January, for instance, she talked about what she eats in a day while expecting, such as hardboiled eggs and quinoa cakes.

While it may be a bit until the world learns the name of Prepon and Foster's new bundle of joy, one thing is certain: their "new bundle of love" is a cutie pie.