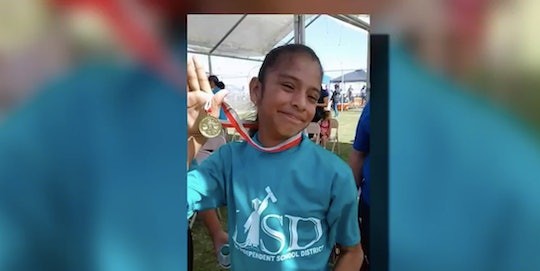 Ever since President Donald Trump took office in January, law enforcement has stepped up its deportation and arrests of undocumented immigrants across the country. As the raids and arrests have increased (in May, "41,000 either known or suspected undocumented immigrants" were arrested during Trump's first 100 days, according to The Hill) many Americans have taken to social media to speak out on law enforcement's controversial actions under the Trump administration. On Thursday, the internet reiterated its concern and outrage after news broke that law enforcement detained a girl with cerebral palsy.

On Tuesday, a 10-year-old girl named Rosamaria Hernandez was en route to a hospital in Corpus Christi, Texas, when Border Patrol agents "stopped the ambulance she was riding in" at a security checkpoint, according The New York Times. Hernandez, who has cerebral palsy, was in need of emergency gall bladder surgery — a concern that was put on hold while Border Patrol Agents figured out her immigration status. Although Border Patrol Agents allowed Hernandez to receive treatment at the hospital she was initially traveling to, she was ultimately taken into custody and then transferred to a "government-contracted juvenile shelter in San Antonio" due to her status as an undocumented immigrant, according to NPR. Hernandez, who was brought to Laredo, Texas, by her undocumented parents when she was just a few months old, is now hours away from her home and is at risk for being deported.

Romper has reached out to Immigration and Customs Enforcement's San Antonio office for comment on Hernandez's detainment.

Take a look at some of the outraged responses below:

In response to the backlash, a Border Patrol spokesperson said, according to The Guardian:

The Laredo Sector Border Patrol is committed to enforcing the immigration laws of this nation. Travelers that present themselves for immigration inspections at our checkpoints are inspected thoroughly and expeditiously ... Due to the juvenile’s medical condition, Border Patrol agents escorted her and her cousin to a Corpus Christi hospital where she could receive appropriate medical care. Per the immigration laws of the United States, once medically cleared she will be processed accordingly.

Of course, there's no denying that Hernandez is undocumented — that isn't the part of this story that has people upset. What's frustrating to a lot of people is that Hernandez is being deported despite her age and medical condition. Is this what Trump was talking about when he said in February that he was "getting really bad dudes out of this country," according to CNN? Even if Hernandez didn't have a disability, many argue that separating a child from their family and the only country they've ever known is cruel. Countless studies have shown that undocumented children can suffer from severe psychological problems if they become separated from their parents or if they believe that it's a possibility they will be separated — in fact, in a survey conducted on undocumented parents, three-quarters of the parents surveyed said their "child showed symptoms of post-traumatic stress disorder," according to The Hill.

Hernandez's mother, Felipa de la Cruz, who brought her daughter to the United States so she could have a chance at medical treatment, said, according to The New York Times:

I’m a mother. All I wanted was for her to get the surgery that she needed. It never crossed my mind that any of what is happening right now could happen. When you’re a mother, all you care about is your child.

Hernandez's hospital discharge papers advised that she should see her primary care physician within three days of the surgery, something that hasn't yet happened, according to ABC News. Furthermore, a doctor who has seen Hernandez told ABC News that she should be discharged to "a family member familiar with her needs." In short, Hernandez's detainment could be dangerous to her health and well-being, and goes against the advice of her doctors.

At this time, it's unclear if Hernandez will be able to return to her family. For now, Hernandez will be "under the jurisdiction of the US Department of Health and Human Services until a custody determination has been made by an immigration judge," according The Guardian. One can only hope that Hernandez will quickly be reunited with her loved ones — no child should have to go through something like this.

More Like This
There's Now A Tampon Shortage... Because Baby Formula Wasn't Stressful Enough
People Got Real Judgy After Kate Hudson Shared A Photo Of Her 3-Year-Old In A Stroller
Viral TikTok Breaks Down How Beautifully Bluey Depicts One Character’s Infertility
Keep Talking To Your Kids About Abortion — It's More Important Than Ever