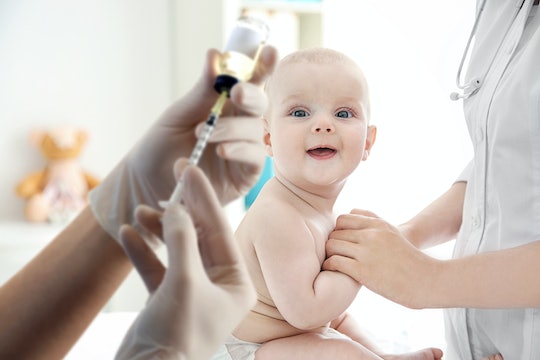 Vaccine safety is one of the most hotly debated topics, but amidst a concerning measles outbreak, one state isn’t going to engage in the discussion any longer. As Forbes reported, a new law now limits measles vaccine exemptions in Washington state as the alarming outbreak has spread faster than anyone expected. According to a recent report from the World Health Organization (WHO), measles cases are already up 300 percent over last year.

Cases of measles have appeared in 23 states so far, with 839 cases reported, according to CBS News affiliate WSBT. What's more, this is now the largest outbreak of the disease in the United States since it was declared eliminated in 2000, according to the U.S. Centers for Disease Control and Prevention (CDC).

Now, Washington Gov. Jay Inslee is taking action to try and stop the spread in his state. As TIME reported, Inslee signed a measure on Friday, May 10, that limits the reasons parents can opt their children out of vaccination before entering a day care center or school. Previously, parents could claim a personal, philosophical, religious, or medical exemption to the vaccine, according to WSBT, but the new measure now bars personal and philosophical exemptions.

The new measure goes into effect at the end of July, according to TIME.

Washington has been hit hard by the outbreak, with 70 cases reported, according to Forbes, and roughly 90 percent of those infected were not vaccinated against the disease.

The Washington State Department of Health noted that the measles, mumps and rubella vaccination is the best protection against all strains of measles; two doses of the vaccine are 97 percent effective at preventing the disease. (According to the Washington State Department of Health, parents can find out the vaccination rate at their child’s school at www.SchoolDigger.com.)

The CDC recommends children receive two doses of the MMR vaccine; the first at age 12 to 15 months and the second at 4 to 6 years of age. While there is no federal law requiring the vaccine for children entering childcare or public school, all 50 states have laws that make it mandatory, as TIME reported. Eleven states — including Massachusetts, Maryland, Kentucky, Nevada, and Iowa — do not recognize any exemptions at all during an outbreak, according to the CDC.

That’s important because measles is one of the most infectious diseases around, according to Vox, and when people aren’t vaccinated, one person infected with measles "can infect 12 to 18 others." That rate is much higher than diseases that are commonly feared like Ebola, according to Business Insider. Before the MMR vaccine was developed, about 500 people in the United States died each year from measles, Vox reported.

Only time will tell if more states follow suit to close loopholes that allow dangerous diseases to spread.