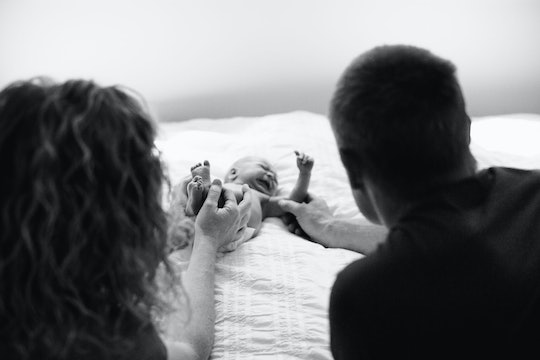 The Home Visitor Moms Need Most After Birth? Dad, According To New Study

In all the debate about policies regarding paid family leave and how to lessen the huge burdens placed on parents, one rather large factor in easing the transition to family life for today's young adults has been oddly left out of many conversations on the topic: A new dad's schedule, or lack thereof, to be present for a partner. A new working paper published by the National Bureau of Economic Research looked at the effect family leave policies have on maternal health after birth, concluding that "mothers bear the burden from a lack of workplace flexibility" when Dad can't stay home to help.

As the New York Times reported, a new survey of Swedish families by researchers from Stanford University has come to a conclusion many moms who've been through childbirth and the recovery from it could tell you: A partner who's been granted enough time off from work to actually be home to help in those early days and months makes all the difference.

Sweden passed a law in 2012 granting fathers 30 days paid leave in the year following their baby's birth, as the Times reported, giving economists and researchers Maya Rossin-Slater, Ph.D., and Petra Persson, Ph.D. an opportunity to observe what happened when the Northern European mecca of all things good and progressive changed its parental leave policies.

At that time, the nation allowed 16 months of job-protected paid leave per newborn to be shared between two parents (which is still pretty epic compared to the U.S. IMO), but still expected parents share the leave so that both couldn't be at home at the same time, except for 10 days immediately surrounding a baby's birth, as the Stanford research detailed.

However, Sweden always Sweden-ing, it was decided that revisions should be made so that dads could become more involved due to the fact that solo paternal time with a young child has been tied to more involvement in the fathering process as a child grows.

The country's new policy, called the “Double Days” system, meant that parental leave for both mom and dad could coincide for 30 more days days during a child’s first year, with the flex time being used whenever it most benefited the new family in question, and, wait for it, without having been long in the planning back at the office with your boss, the New York Times detailed.

Meaning, a dad whose partner woke in horrible nipple pain, or maybe she just couldn't stop crying and really needed some another adult to comfort her as she weathered normal hormonal changes that happen postpartum, could now safely call in to work and let them know he was needed at home for the day, thanks.

"While paid leave for new parents is nearly ubiquitous in most of the developed world (with the important exception of the United States), family care leave is much less common," concluded the study's authors.

"Our results suggest that the availability of such leave — which fathers could use to care for mothers in the immediate postpartum period — could have important and previously uncalculated benefits for families."

As Rossin-Slater and Persson added, having partners at home able to help during the critical postpartum period could greatly improve such post-baby developments as loneliness and stress, which can sometimes play into perinatal mood and anxiety disorders like postpartum depression, as Working Mother noted.

I'll never forget that although my husband took three weeks off after the birth of our third child (something he could get away with due to being a contract employee who simply wouldn't earn money), he was severely punished in a political sense when he returned. Just needing a helping hand from your partner at one of the most crucial times in your life shouldn't be an impossibility, because families end up paying for it in other ways.

If you or someone you know is experiencing depression or anxiety during pregnancy, or in the postpartum period, contact the Postpartum Health Alliance warmline at (888) 724-7240, or Postpartum Support International at (800) 944-4773. If you are thinking of harming yourself or your baby, get help right away by calling the National Suicide Prevention Lifeline at 1-800-273-8255, or dialing 911. For more resources, you can visit Postpartum Support International.

More Like This
Breastfeeding Twins: Everything You Need To Know
The Covid Vaccine For Kids Under 5 Has Been Sent To The FDA For Review
6 Ways To Fix A Shallow Latch So Your Baby Can Nurse Properly
Why Does My Baby Call Everyone Mama?