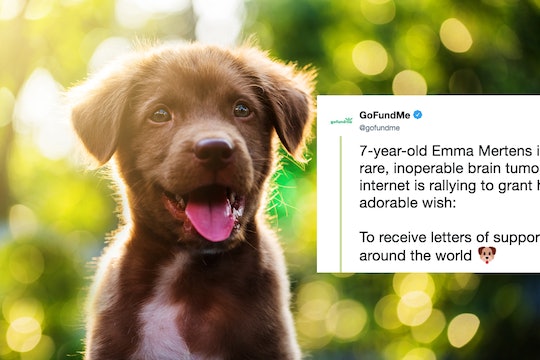 A 7-year-old Wisconsin girl suffering from an inoperable brain tumor requested letters of support from dogs around the world to help her through treatment, as TODAY reported. And the internet delivered in the most adorable way. In a matter of weeks, Emma Mertens' post office box and email inbox have been flooded with photos and encouraging messages from furry friends from every corner of the globe after her sweet request went viral last month.

Mertens, currently undergoing treatment for her cancer, put out the call online a few weeks ago on a Caring Bridge site started by her parents, according to TODAY. Not long after, the site was making its rounds online, with supporters sending her photos of their pups along with well wishes. A GoFundMe page for the family has also been started in an effort to lift some of the financial burden from her medical care.

As of Friday, the page has raised nearly $108,500 — well over its $100,000 goal — and helped make good on Mertens' request for puppy pics. Indeed, the comments section on the page has been flooded with photos of cute dogs.

"Hi Emma! I am Billy from Quebec city, Canada! I just wanted to tell you that I support you from where I am and I really believe you are a strong little girl and that you will fight this disease like a strong superwoman! I am giving you biiiiggg kisses and also kisses to your family," one pet owner wrote, along with a photo of their pooch, on the GoFundMe page. "Life can put some really hard challenges on us but with love (and chicken nuggets, my fave) we can overcome anything!"

"Emma, my name is Bailey and I live in South FL. I'm sending you lots of love, hugs, sloppy kisses, prayers, and good wishes for a full recovery," another wrote to the little girl.

"This is Ryker. He is my Service dog (I spend a lot of time in hospitals too). Once when I was in the hospital he left the room and went and 'checked' on all the patients on the floor I was staying on. He will do anything for bacon! We both hope you get better," a third wrote.

GoFundMe later shared some of the sweet responses on Twitter:

Mertens has been diagnosed with a rare and inoperable tumor called a Diffuse Intrinsic Pontine Glioma (DIPG). According to People, before receiving her diagnosis, the little girl experienced headaches and flu-like symptoms. Several days passed with no improvement, according to the outlet, so her parents brought her to the Children's Hospital of Wisconsin, where she reportedly underwent a CT scan that uncovered her harrowing diagnosis.

"We were greeted by an enormous team of experts and a CT scan showed the tumor was blocking flow of her spinal fluid causing it to pool at the top of her brain. She had some swelling as well. She was rushed to the OR to put in a drain," her mother, Tammy Mertens, shared on her Caring Bridge page.

According to both People and the Caring Bridge site run by Emma's parents, she later underwent a biopsy that revealed it was a DIPG tumor. Emma's undergone several surgeries, including one to put a permanent shunt in that is "basically a tube that will drain her fluid in her brain into her abdoment." She's now said to be in the middle of a six-week run of daily radiation therapy treatments, her parents shared on Caring Bridge.

Her father, Geoff Mertens, wrote on her Caring Bridge page that he and his family are focused on celebrating "each day, one day at a time." According to USA Today, no one has ever survived a DIPG tumor.

"Our goal is still to celebrate each day, one day at a time. Today was a good day. We had a break in between appointments and went to Build-A-Bear and the Cheesecake Factory," he wrote in a Feb. 7 journal entry.

The Mertens family is clearly keeping their spirits high as Emma battles this disease. Part of that includes combing through the thousands of dog photos she's received. Her parents said on her Caring Bridge site that she's received letters from nearly every state in the United States and several countries around the world, including The Netherlands, England, Australia, Venezuela, Italy, and Germany.

"Emma's email inbox was completely full (2500) and so was her P.O. Box. Many pictures of puppies really made her laugh or smile. Thank you to everyone who is trying to put a smile on her face, we appreciate the gesture," her father wrote on Wednesday.

For those interested, you can send a photo of your pup to Emma at the address or email below:

Emma's family said on Caring Bridge they've also created a Facebook page, which they hope will help streamline the process of getting your adorable photos to Emma. Her parents have said that the P. O. Box and Email received so many messages, they're having a hard time getting through them all. Sometimes the internet is a truly beautiful tool!