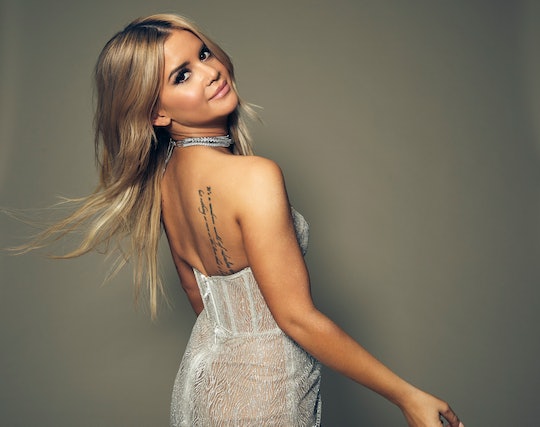 You might not think Michael Scott and diaper cakes go hand-in-hand, but Maren Morris brought her baby shower and her love for The Office together with a perfectly hilarious quote from the show true fans will appreciate.

The country singer, who is currently expecting her first child with husband Ryan Hurd, took to Twitter earlier this week to share a few photos from the celebration for their baby boy, which looked like a really lovely party. For starters, in one photo, Morris is standing in front of sign that says "Baby Hurd" while wearing a powder blue dress and holding her bump. In another, the proud parents-to-be lovingly stare into each other's eyes. And when it came down to decoration, they kept things simple — baby photos of both Hurd and Morris were hung up on furniture and guests were given miniature bottles of prosecco to "pop when she pops."

But the best part about Morris' baby shower was the fact that she used a hilariously on-brand quote from The Office as the caption. "We gave you a golden shower, Phyllis. Well, where's MY golden shower?"

The quote comes from the "Baby Shower" episode in Season 5 of The Office, which focuses on the Dunder Mifflin office workers throwing a baby shower for Michael Scott's ex-girlfriend, Jan. It's one of those stand-out quotes fanatics just know. But Morris isn't sold that her followers understand the reference. "You guys don't appreciate The Office and it shows," she jokingly wrote in a follow-up tweet.

It's safe to say that Morris and Hurd are huge fans of The Office. Beyond the quote reference, in 2018 the couple recreated Jim and Pam's elopement for a photo when they visited Niagara Falls. "JIM/PAM MOMENT," Hurd captioned the photo.

While Morris previously said that she does have a name picked out for her son, she said will "never telllll" until he is born. But if she's still considering some other contenders, I personally think Michael Scott Hurd would be perfect.