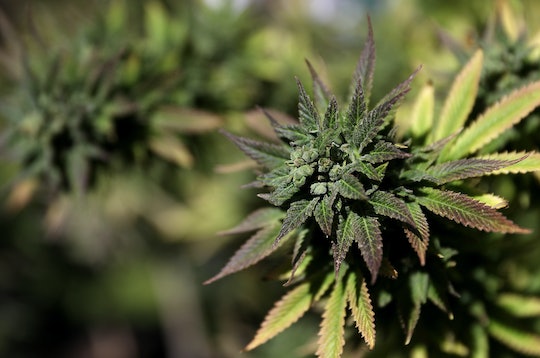 As marijuana becomes legal in more places across the country, researchers are able to dive into studies that will help them better understand all of its effects on the human body. Most people know the basics about marijuana, like it can give you the munchies and make some experiences much more interesting. Now, though, a new study found marijuana may be linked to higher sperm count. And, honestly? That's pretty wild!

On Feb. 6, a Harvard study exploring marijuana and its effects on fertility was published in the journal Human Reproduction. According to its abstract, the study included 662 subfertile men at the Massachusetts General Hospital Fertility Center between 2000 and 2017. Subfertile essentially means they're less fertile than other men, as outlined by GP Online, and is different than infertility.

In total, the men provided 1,143 semen samples, according to researchers. They also had 317 men who provided blood samples so the researchers could measure the levels of reproductive hormones. Participants self-reported any marijuana use or use of other drugs.

"Studies of marijuana abuse in humans and animal models of exposure to marijuana suggest that marijuana smoking adversely impacts spermatogenesis," the researchers noted in their abstract. As a result, Bloomberg reported that researchers predicted that marijuana use would negatively impact sperm counts. But, what their study found revealed the exact opposite!

The findings revealed participants who admitted to using marijuana had higher sperm counts than those who did not. As outlined by Quartz, participants who had used marijuana at some point over the course of their lives had an average sperm concentration of 62.7 million sperm per milliliter (mL) of ejaculate. The men who hadn't used marijuana had average concentrations of only about 45.4 million sperm per mL. That's a big difference!

Researchers did report that, of the 317 men who gave blood samples, those who'd smoked weed had lower levels of follicle stimulating hormones or FSH, which are critical for sperm growth, in their blood. However, according to the study's abstract, researchers found "more intense use" of marijuana was linked to "significantly higher concentrations of testosterone" — which is also needed for sperm development.

Dr. Feiby Nassan, PhD, the study's lead author, did note their findings were the exact opposite of what researchers initially hypothesized, according to Inverse. But, the results aren't totally out of the blue. Nassan told Inverse:

However, they are consistent with two different interpretations, the first being that low levels of marijuana use could benefit sperm production because of its effect on the endocannabinoid system, which is known to play a role in fertility, but those benefits are lost with higher levels of marijuana consumption.

That essentially means the amount of marijuana that you use makes a difference. More research would need to be done in order to figure out where those "low" and "high" levels of use lie.

Nassan also pointed out, according to EurekAlert!, "An equally plausible interpretation is that our findings could reflect the fact that men with higher testosterone levels are more likely to engage in risk-seeking behaviors, including smoking marijuana."

So, although the results of the study may seem exciting now, researchers are saying it should be interpreted with caution. One issue is participants self-reported their own marijuana intake and researchers can't guarantee their accuracy. Although this does mean that marijuana's impact on sperm doesn't seem to be as straightforward as previously thought, there are still a lot of variables to explore.