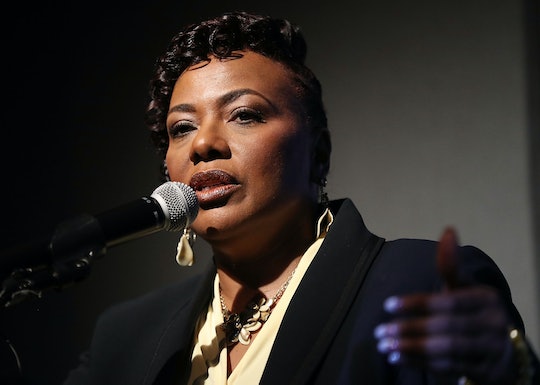 It was on this day 51 years ago that one of the most iconic social activists and leaders in the pursuit of civil rights lost his life to an unfair but illuminating homicide. And on the anniversary of his death today, Martin Luther King Jr.'s daughter penned a heartbreaking, powerful message, reminding us all that we have a ways to go to achieve her father's "dream."

Earlier this morning, Bernice King shared an old family photo of her father, mother, and siblings. The image itself is worn, and there are creases throughout. She references this in the caption. "Tattered, but fitting, photo," King began. "A family who was robbed of a father and husband by white supremacy, racism, hate, apathy, opposition to economic justice and gun violence. These evils persist. But I just don’t believe it’s over. We still can get to that 'Promised Land.' Let’s go."

The responses have been overwhelmingly positive, affirming Bernice's stance, and agreeing that we must go forth in the direction that MLK Jr. first suggested. "Your father’s memory is a blessing to the whole of humanity. May we all come to embody the radical, accountable love he stood for," one follower responded. "Thank you for posting and for being willing to remain in the public eye," said another.

It was on this day in 1968 when King first traveled to Memphis, Tennessee to join a sanitation worker's strike, according to History. Around 6 p.m., King gave a speech at the Mason Temple Church, during which he was assassinated. In the speech, which his daughter Bernice references, he shared the following:

In the years since, Bernice and her siblings — as well as the world at large — have worked to not only maintain but grow King's legacy. In an interview with Atlanta Magazine in 2013, Bernice commented on his legacy as such.

"My father was one of the most hated men in America in 1968 when he was assassinated, and now you can look around forty-five years later and he is one of the most loved men in the world," she told Atlanta Magazine. "And you could say that different things contributed to that, but I think the main factor was the steadfastness and devotion and dedication and sacrificial commitment of my mother to carry on his work after his assassination. I am — and perhaps because I am female — constantly thinking about, how do we enshrine her work?"

In another speech earlier this year on what would have been her father's 90th birthday on Jan. 21, Bernice called for action in the face of our current political climate, The Times Free Press reported.

"We are in a state emergency because of our humanitarian crises, and it's not at our southern border," she said. "The concern for human welfare is being threatened. When prejudice and bigotry are emboldened when schools continue to be unsafe spaces because of impotent gun control laws. this is a humanitarian crisis and we are in a state of emergency."

It's clear that though the impact and influence of King's work is still deeply felt today, we still have a ways to go until we can fulfill the "dream" he once so eloquently prophesied in which all individuals would be seen, and treated, with equanimity. For all of our progress, we can be humbled by how far we have to go, and inspired to know that King's family is still at the forefront of the movement.

More Like This
Chris Evans Has Choice Words For Critics Of The Same-Sex Kiss In 'Lightyear'
Raising Anti-Racist Kids: Imara Jones
I Started a Magazine for Gay Parents in 1998. Here's What's Changed Since Then.
10 Of The Raddest Movies From The '90s To Watch On Girls Night