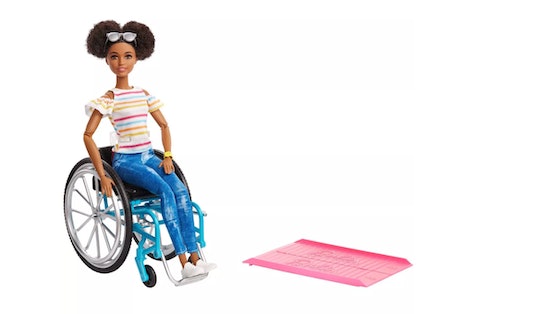 Since the 1950s, Barbie has come a long way in terms of inclusivity, diversity, and dismantling traditional gender roles. And most recently, the company behind the iconic dolls, Mattel, unveiled its first black barbie to use a wheelchair and it's garnering tons of support for its inclusive design.

The doll, which even comes with its own accessibility ramp, officially became a reality earlier this month, according to Business Insider, and it's already a hit. The design, which features a black doll styling natural hair in an every-day-use wheelchair (rather than a hospital one, as Twitter users have pointed out), is being praised for the representation it brings to kids everywhere.

In a statement to INSIDER, Mattel said its intention behind the Fashionista line, which this new Barbie is a part of, and other recent lines is to “be more reflective of the world girls see around them.” Indeed, this new and inclusive design is a part of Mattel’s effort in recent years to be a more inclusive brand.

"This is done right in every way possible," one Twitter user said of the new doll, pointing out that the Barbie was not only a person of color and in a wheelchair, but also that it was a part of the Fashionista line — meaning the focus was not on the disability but rather the Barbie's interest in fashion.

"I can't even begin to express how happy I am that more and more young girls are growing up seeing themselves in Barbie," another user said.

Indeed, the newest design is being praised for the representation and inclusivity it would offer to children around the world. Social media users have praised the doll for its natural hair and every-day style wheelchair, which is different from hospital wheelchairs that have two handles. This is in contrast to the recent past, when Mattel discontinued one of its dolls using a wheelchair after it didn’t fit inside Barbie’s house, according to Public Radio International.

Just earlier this year, the company said that it would be celebrating its 60th anniversary by “honoring the largest lineup of global female role models.” In the same press release, the brand said that it planned on honoring more than 20 women spanning multiple countries and continents, who speak 13 languages and range from 19 to 85 years of age. Women like actress and activist Yara Shahidi, tennis star Naomi Osaka, and model Adwoa Aborah were included in the line. Mattel said it would be the “most diverse” collection of Barbies and a continuation of the “Shero” program that was launched in 2015.

In 2016, Mattel also announced that it would be making the Barbie doll available in three, more inclusive, sizes: petite, tall, and curvy. At the time, Mattel said in a press release, “Barbie reflects the world girls see around them.” The same press releases noted the dolls “ability to evolve and grow with the times” as a central reason as to why Barbie continues to stay relevant to children and adults alike overtime.

The newest inclusive design is already sold out on Target’s website, but you can be added to a list for when it's back in stock. However, it looks like it can be purchased from third-party sellers on Amazon.

Considering the positive reactions this Barbie has already received in its short time on the market, hopefully Mattel continues to produce more inclusive and diverse dolls that countless kids can themselves in.

More Like This
WowWee’s New Fairy Finders Will Keep Kids Distracted For Hours
The Covid Vaccine For Kids Under 5 Has Been Sent To The FDA For Review
Prince George Hosted A “Little Cake Sale” For One Of His Dad's Favorite Charities
Lyle, Lyle, Crocodile Is Heading To The Big Screen As A Musical Comedy