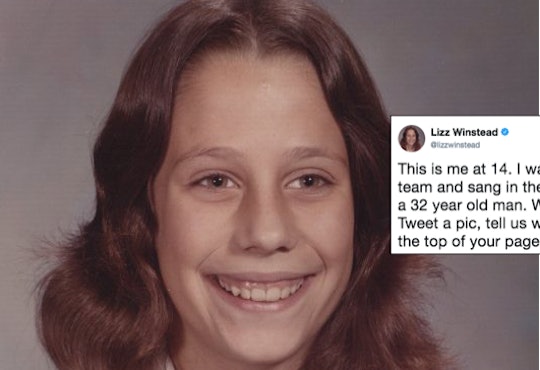 Being a teenager is not an easy time, but that's a well-known fact. You might feel like you're all grown up, but those awkward, cringe-worthy teen years are still very much a part of your childhood. That's why it's so incredibly important, yet rattling, that people are pointing out the vulnerability and innocence of teenagers amid allegations that Roy Moore, a GOP candidate for an Alabama Senate seat, had allegedly pursued a girl when she was just 14 years old and he was 32. Over the weekend, the hashtag #MeAt14 started a movement on Twitter to remind people that 14-year-olds are children who are unable to consent.

Although Moore has not yet returned Romper's request for comment, the Republican politician did address the allegations that he had reportedly pursued a romantic relationship with a 14-year-old girl during a speech, according on Saturday to NPR:

They are completely false and untrue about something that happened nearly 40 years ago.

During his speech, Moore called the claims "very hurtful" to him, "personally." Although Moore has flat out denied the allegations, first reported by The Washington Post on Thursday, Twitter users are fighting back and bringing attention to just how wrong any adult dating any teenager actually is.

Writer and co-creator of The Daily Show Lizz Winstead started the #MeAt14 movement on Twitter, according to Scary Mommy, for everyone to share their own stories of vulnerability and immaturity. And most importantly, to point out just how inappropriate pursuing a relationship with a teenager as an adult truly is. Their stories are harrowing, poignant, and definitely worth reading.

I remember who I was 14 years old. I was a member of the debate team, I dyed my hair an awful red color, and I could not have consented to a relationship with an older man.

#MeAt14 has the power to do exactly what #MeToo did. In mid-October, people were prompted to share their stories of sexual assault and sexual harassment using the #MeToo hashtag amidst allegations against Hollywood producer Harvey Weinstein. What resulted from #MeToo was a collective awareness of sexual assault being too prominent in our society and almost everyone has a heartbreaking story. Most importantly, it held and continues to hold men accountable, letting them see just how much of an impact their actions could have.

And #MeAt14 could easily bring light to the same issue — consent — and just how harmful (and illegal) engaging in a relationship with a teenager actually is.

The legal age of consent is different for each state in the United States, but 18 is the standard age of consent. All 50 states recognize 16 as the minimum age for legal consent, according to The Daily Dot, with more than half approving 16 as the legal age. But the age of consent is put in place by these states for a reason — a teenager, with their still-developing brain, will continue to learn from their (many) mistakes made in their lives and can not consensually agree to enter in a relationship with an older person. Science has found that the adolescent brain continues to mature into a person's 20s. Therefore, how can an adult expect a teenager to give her (or his) willing approval to be in that kind of relationship? They can't and shouldn't be put in that predicament.

Beyond the allegations made about Moore — which if proven true, many Republicans have reportedly said he should step down — people sharing their #MeAt14 stories is so important. By putting a face to their 14-year-old selves, these women on Twitter are bringing attention to an issue that isn't talked about enough — but, sadly, at this point in time, needs to be.