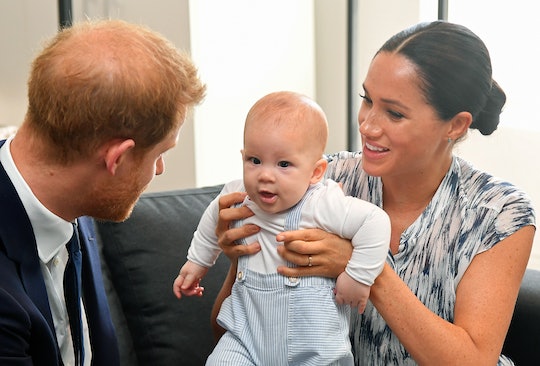 Meghan Markle, Prince Harry & Baby Archie Are Making A Trip For The Queen

The Duke and Duchess of Sussex have been mostly ensconced at a private home on Vancouver Island off the west coast of Canada since they made their bombshell announcement on Jan. 8. As the couple explained in a statement last month, "We intend to step back as ‘senior’ members of the Royal Family and work to become financially independent, while continuing to fully support Her Majesty The Queen."

In the following days, Queen Elizabeth reportedly called Prince Harry, his father Prince Charles, and older brother Prince William to have meetings at her estate in Sandringham to discuss how the future would look for the Duke and Duchess of Sussex. After coming to an agreement, Queen Elizabeth released a statement noting that they would always be "much loved members of my family."

To that end, Queen Elizabeth has reportedly asked Prince Harry, Markle, and baby Archie to return to the United Kingdom for a special service at Westminster Abbey at the beginning of March, according to The Sunday Times.

The entire royal family will reportedly be present at a special service to honor the Commonwealth at a service at Westminster Abbey on March 9. The Sunday Times also reported that Markle and Prince Harry are expected to go through a final round of official engagements before returning to Canada, along with their 9-month-old son Archie.

Despite their decision to step back from their roles as working royals and move towards financial independence from the Crown, the reality is that Markle and Prince Harry remain part of the royal family. And they also made it clear from the outset of announcing their decision that they would honor the Queen whether it was in an official role or otherwise.

"I will always have the utmost respect for my grandmother, my commander in chief, and I am incredibly grateful to her and the rest of my family, for the support they have shown Meghan and I over the last few months," Prince Harry said in a statement last month. "I was born into this life, and it is a great honor to serve my country and the Queen."

When Markle and Prince Harry return to the U.K., it will be the first time they will attend an official engagement alongside the rest of the royal family since their big announcement, including Prince Harry's brother Prince William and his wife Kate Middleton. And I bet it's going to be a lovely reunion.