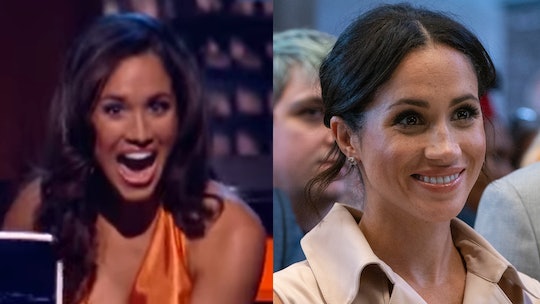 The artist formerly known as Meghan Markle, now formally known as Meghan, Duchess of Sussex, has experienced huge changes over the last few years. She quit acting, closed down her lifestyle blog, moved to London, got married, and became a Duchess — for starters. I'm sure if someone told her as a teenager what her 30s would look like, she wouldn't have believed it. And now that she has been living the royal life for two months, it seems like a good time to take a look at Meghan Markle's life then and now.

Meghan was born on August 4, 1981, in Los Angeles, according to Biography.com. After graduating from the Northwestern University School of Communication in 2003, she began her career as an actress, eventually getting cast in her career-making role as Rachel Zane on the TV show Suits in 2011, Biography.com reported. While working on the show, a friend introduced her to Prince Harry, Duke of Sussex, totally changing the course of her life and her career.

And even though there are plenty of things about Meghan that are different, it's clear that she still has the same values. Here are a few photos of Meghan then and now, showing how much her life has changed.

Then: A Tourist Visiting Buckingham Palace

As a teenager, Meghan posed for a picture in front of Buckingham Palace that has been widely circulated on the internet. Little did she know, the woman who lived inside would one day become her grandmother-in-law.

Meghan reportedly has the highest approval from Queen Elizabeth II, according to The Cut — which is no surprise, considering their shared affection for dogs.

Then: Married To Trevor Engelson, A Hollywood Producer

Meghan and Trevor Engelson got married in September 2011, Page Six reported. By September 2013, the pair had reportedly separated.

The couple of the century announced their engagement in November 2017, and were married in May 19 2018.

Then: A Small Wedding In Jamaica With A Casual Dress

Engelson and Meghan got hitched at the Jamaica Inn in Ocho Rios, Jamaica, for about 100 guests, Page Six reported. She wore a casual strapless white gown.

Meghan and Prince Harry were wed in a huge royal wedding at Windsor Castle, and the ceremony was broadcast all over the world.

In addition to starring on Suits, Meghan is also known for roles in Remember Me, Horrible Bosses, A Lot Like Love, and Get Him to the Greek, according to her IMDb page. She also got her start as a briefcase model on Deal or No Deal. Fun fact!

Instead of heading to a television set every day, Meghan now makes appearances alongside Prince Harry, often donating their time to charitable causes.

Then & Now, What Hasn't Changed: Her Philanthropic Nature

Throughout Meghan's career as an actress, she made sure to give back to her community as much as possible. In a 2016 essay for Elle, she explained that her parents always taught her to be philanthropic, and how that translated into her adult life. She wrote:

I would ask my show executives to ensure that our extra filet mignon and sweets aplenty were donated to a soup kitchen I'd been volunteering at. And they said yes.

And now, as a member of the royal family, Meghan is dedicating a large chunk of her time to a variety of causes. Last month, Meghan was appointed a patron of The Royal Foundation, which is the "primary philanthropic and charitable vehicle" for William and Catherine, Duke and Duchess of Cambridge, Prince Harry, and now Meghan, as noted on the foundation's website.

It's clear that Meghan is not letting her new royal status go to her head — she is already giving back to the world even more than before, and I personally can't wait to see what she does next.