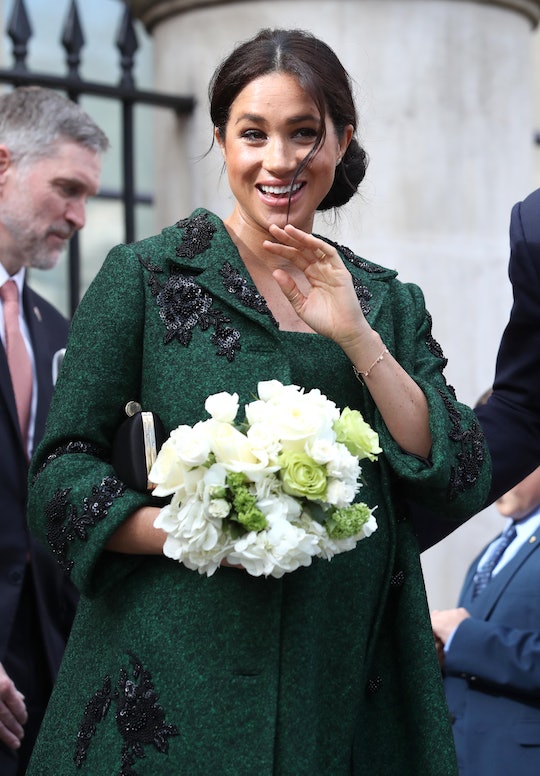 Unlike the royal births of days past, the Duchess of Sussex, Meghan Markle, decided to do things differently and forego the celebratory reveal of both mom and baby mere hours after giving birth. The world was forced to wait to catch a glimpse of the new mom and her newly minted son... but the wait was more than worth it. Meghan Markle's first photos after giving birth are here, and the new mom is glowing.

After welcoming their son — the baby's name has not yet been revealed — on Monday, the couple emerged from the postpartum haze at Windsor Castle, posing for pictures and answering a few questions from the press. The Duke of Sussex, Prince Harry, gushed about his new son as he held him in his arms. When asked who the baby takes after more, Prince Harry said, "Everyone says that babies change so much over two weeks. Basically we're monitoring how the changing process happens over this next month, really. His looks are changing every single day, so who knows."

But it was new mom, Meghan (who literally could not stop smiling during the entire, relatively short press conference), who seemed to be glowing. Wearing a sleeveless white dress, with a bow placed perfectly above her postpartum stomach because, yes, you still look pregnant a few days after you give birth, the new mom couldn't stop talking about how lucky her and her husband were, now that their little had finally arrived.

“He’s just been a dream, so it’s been a special couple of days,” she said.

Meghan also gushed about motherhood and how much she is loving her new role. "It’s magic. It’s pretty amazing,” she said. “I have the two best guys in the world so I’m really happy.”

That happiness was palpable, although admittedly both parents looked, well, tired. You know, like parents. But Meghan did say her son has "the sweetest temperament" and is "very calm," looking down lovingly at her son as he slept in her husband's arms.

Baby Sussex was born at 5:26 a.m. on Monday, weighing 7lbs 3oz., according to CNN. Meghan and Prince Harry are reportedly meeting with Queen Elizabeth on Wednesday so she can meet her great grandson for the first time, and it's reported that at that initial meeting names for Baby Sussex will be discussed. On the way to the press conference, the couple "bumped into" Prince Phillip, so the new baby has already seen a few royal family members in the two days since his birth. "We just bumped into the Duke as we were walking by which was so nice," Meghan said. "It'll be a nice moment to introduce the baby to more family and my mum's with us as well so it's been really great."

During the press conference, Prince Harry described new parenthood, admitting that it has only been two days but that he is absolutely loving the job. "Parenting is amazing," he said. "But we're just so thrilled to have our own bundle of joy and to spend precious time with him as he slowly, slowly starts to grow up." On Monday, hours after his son was born, Prince Harry addressed the media, saying "the baby's a little bit overdue," so clearly the new parents were more than ready for their baby's arrival and so, so grateful he's finally here.

The world is unlikely to see the new family of three on a regular basis for the foreseeable future and as they settle into their new normal, but that's how it should be, right? Now Meghan can enjoy the trials, tribulations, utter joys, and the sleep deprivation that comes along with new motherhood, and in a way that best works for her and her new family.

More Like This
It's A Beautiful Day In Jenny Slate’s Neighborhood
Is It Safe to Take Ibuprofen While Breastfeeding?
Jenny Slate Played Our Parenting Edition Of Never Have I Ever & Here’s What We Learned
Kim Kardashian Had To Pause A TV Interview To Shush Her Noisy Sons In The Audience