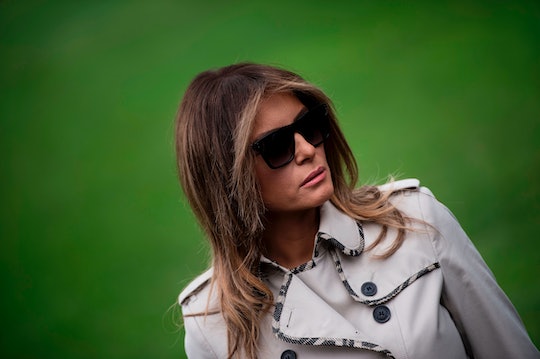 Conspiracy theories are as old as the earth. I'm convinced that the first conspiracy theory formed the minute a person learned how to speak. Elvis Presley is still alive. JAY-Z is part of the Illuminati. There were two shooters involved in John F. Kennedy's assassination. The first lady of the United States has a body double. The conspiracy theories out there run the gamut. Normally, I roll my eyes at these far-fetched ideas, but reading Melania Trump body double jokes is getting me through my afternoon.

Yes, you read right. According to Newsweek, there are people who believe that the first lady has a body double. Trump always wears sunglasses, and everyone knows that you can tell a person by their eyes. Some people even zeroed in on footage from a Friday appearance with her husband, President Donald Trump, as possible proof that Melania is not Melania, after all, Newsweek reported.

OK, so I am not buying this whole "the first lady has a body double" theory (if she does, though, the first family owes taxpayers a hell of a lot of tax dollars). But that doesn't make the body double jokes any less funny to read.

So what exactly is this evidence of Melania Trump's body double? According to AOL, "body double" conspiracy theorists point to President Trump's press conference on Friday addressing hurricane relief for Puerto Rico and the Iran nuclear deal. In a short clip making the rounds on social media, Trump calls out to the first lady, which conspiracy theorists claim he did in order to cover up the fact that she was actually in another place, AOL reported.

OK, but, you may start to ask, Melania Trump is standing right there. How could she be somewhere else? It looks just like her. Not so fast, my dear skeptics. According to Newsweek, conspiracy theorists point to the differences in appearances between Melania Trump and this alleged decoy Melania Trump. In the clip, the first lady is wearing big sunglasses and a fashionable beige trench coat with patterned piping. But the chic coat and the oversized sunglasses are not the clincher for "body double" conspiracy theorists. What is, you ask?

Melania Trump's nose, according to AOL. The shape of the first lady's nose is allegedly all wrong, "body double" conspiracy theorists say. I don't even know, people. I don't even know. Actually, I do: If you look closely, you could see the rim of her glasses sitting on the bridge of her nose, changing how it looks. See below:

Of course, Melania Trump isn't the first public figure to get the "body double" treatment. Last year, people were convinced that former Secretary of State and presidential candidate Hillary Clinton had used a body double, according to USA Today. People have also speculated that former President Barack Obama had used a decoy since leaving his post in the White House.

Obviously, body double claims aren't relegated to politicians. Celebrities have been at the center of impostor conspiracy theories since the dawn of time. NME even rounded up nine ridiculous ones that have persisted through the years. According to conspiracy theorists, the Megan Fox seen by the public is actually multiple government clones. Also, Paul McCartney, Beyoncé, and Avril Lavigne have all died and either impersonators or clones have taken their places.

As I said, I'm not into conspiracy theories, but sometimes you can't help laugh at what people come up with. Turns out, though, Melania Trump is not using a body double. According to Uproxx, two pictures of Trump taken in the same day prove the first lady was at the conference. Oh, well. The jokes were fun while they lasted.

Who am I kidding? It's the internet. The body double theories will continue. What a time to be alive.