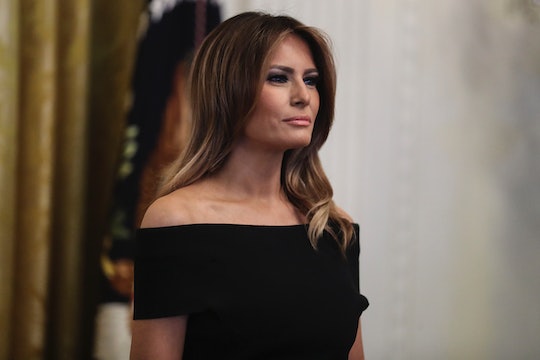 Along with President Donald Trump's opinion on how his presidency is progressing, perhaps one of the most anticipated conversations surrounding the State of the Union address is who will fill the guest seats. The audience members of the address traditionally make a statement, and Melania Trump's State of the Union guest Joshua Trump is essentially there to remind people, um, to not make fun of people named Trump — because that is our nation's most pressing issues, right?

The tradition of inviting everyday Americans to attend the State of the Union began in the 80s when Ronald Reagan invited Lenny Skutnik, a government employee turned local hero who rescued a drowning woman from the Potomac River, according to The Washington Post. Reagan used Skutnik to represent what he called the American “heroic spirit."

Since then, the audience members have gotten progressively more politically charged. George W. Bush left a seat empty in remembrance of the victims of the 9/11 attack on the Twin Towers; and Barack Obama used his empty seat to honor victims of gun violence, as Vanity Fair reported. But Trump has put his own spin on the “Lenny Skutniks” of the State of the Union.

In his first State of the Union, Trump invited the parents of MS-13 victims, an ICE agent who argued for stronger borders, and two small-business owners who stated they had benefitted from the “Trump bump,” according to Vox. Basically, Trump's audience invites also serves as an opportunity to toot his own horn. This year, First Lady Melania Trump is using her allotted invites to raise awareness about bullying.

In the White House's announcement of its 2019 guests, the audience members were described as coming "from all different walks of life, and each has an incredible story to tell." The collection is meant to "represent the very best of America."

The Trump family's list of invitees includes, among others, family members of a couple who were killed by an undocumented immigrant; a police officer who survived a mass shooting in Pittsburgh; a woman granted clemency by President Trump; and little Joshua Trump, a sixth grader who is regularly picked on for sharing a last name with the POTUS, according to The New York Times.

Joshua is the youngest to be invited to the address, and he earned his ticket because of bullying in school "due to his last name.” His mom, Megan Trump, told HuffPost about the upsetting impact the bullying has had on him. “He said he hates himself, and he hates his last name, and he feels sad all the time, and he doesn’t want to live feeling like that anymore, and as a parent that’s scary,” she told HuffPost.

Presumably, Joshua's invitation is a part of Melania Trump’s "Be Best" campaign, a project that, “encourag[es] everyone to be kind to each other and treat each other with respect in everyday life and on social media.”

Joshua is one of 4,788 Americans reported to have the surname Trump, as Vox reported, and the name has apparently not served him well. His bullying has been so intense that he has since stopped using his last name in school, according to The Washington Times. Similarly, Melania recently told ABC News that she is “the most bullied person on the world,” so the two likely have a lot in common.

In response to the Trump administration's choice of guests, representatives of the Democratic party are reportedly bringing along both former and current undocumented immigrants, all of whom either worked at a Trump golf resort or as Trump’s housekeeper; parents of victims of the Parkland mass shooting, along with a Parkland survivor; and a climate-change scientist, as Vanity Fair reported.

Along with using their plus ones to make a statement, many Democrats are planning to attend the State of the Union address dressed in all white, the color of the women's suffrage movement, according to The New York Times. The wardrobe choice is meant to be interpreted as a deliberate show of solidarity against Trump.

While the main narrative of the State of the Union address will be coming from Trump, another, subtler conversation will be occurring through representation. From guests to color palettes to last names, the choices made at the address are full of meaning.