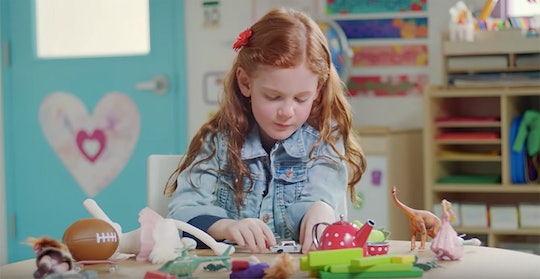 It's easy to argue that toys are just toys, but more and more studies have found that toys can play an integral role in children succumbing to gender stereotypes. Girls, for instance, aren't necessarily encouraged to play with "masculine" playthings, like trucks and legos. Two companies that hope to change this are Mercedes-Benz and Mattel, creating a toy car to inspire young girls and demolish hurtful gender constructs.

At early ages, girls (and boys, for that matter) are sent signals about which toys they should gravitate to, whether it's via a commercial or a heavily gendered section at the toy store. But if you raised young females in a vacuum-like environment where gender wasn't a thing, would they naturally gravitate to "girl" toys, like dolls and tea sets? Some researchers believe the answer is no, arguing that kids are taught at an "early age that some toys are meant for boys and others for girls," according to a Mercedes-Benz and Mattel press release.

Translation: It's all about perception. And if marketing firms and children-oriented companies would reframe how they approach toys and gender, kids might be more apt to follow their own authentic interests.

Mercedes-Benz and Mattel decided to test this theory out by creating an experiment that involved girls, toys, and famed race car driver Ewy Rosqvist.

What happened is this: In a May 15 video titled, "No Limits," a group of girls were individually sat down at a table filled with a variety of toys, all the way from dolls to race cars. The young ladies were then asked to pick a toy up from the pile and explain their reasoning behind their choice. All of the girls picked stereotypical "girl" toys, a turn of events that probably isn't too surprising to parents who've faced this exact dilemma one too many times before.

"I think this is a boys toy because boys love cars," one girl replied when asked her opinion about the race car. "And girls like girls stuff."

Of course, there's nothing wrong with liking so-called girly things if you're a girl. The problem lies in young ladies not having the freedom to choose or have the opportunity to forge their own identities outside of gender norms.

To encourage the group of girls to think outside of the box, Mercedes-Benz and Mattel showed them a video of Rosqvist, a "racing champion" who was the "first woman to enter and win one of the toughest rallies in the world," aka the Argentinian Grand Prix, according to the press release.

“Through Ewy’s story, we saw an opportunity to inspire young girls to ‘play outside the box’ and imagine all the different opportunities open to them without the restrictions of traditional stereotypes,” Mark Aikman, general manager of marketing services for MBUSA, said in a statement, according to Citizen Tribune.

He continued, “We realized that these pioneering women from our past could serve as valuable role models for young girls today and have a positive impact on how they see their future. This led us to collaborate with Matchbox to create a tangible reminder for girls that there are no restrictions on their tomorrow.”

After watching the video, the group were asked to share their reactions.

"It makes me feel proud," one child said, while another girl replied, "Girls can be racers too." OK, I'm not crying, you're crying.

By the clip's end, all of the girls are seen playing with the toy car and are heard praising Rosqvist's accomplishments.

The best part? Mercedes-Benz, along with Mattel/Matchbox, will gift the new toy car to "thousands of young girls through a non-profit partner" and will be "sold in stores nationwide beginning in 2020."

"Proceeds from these sales will be used to make and distribute additional car" and a "teaching toolkit" will be provided, the press release added.

It's fantastic to see these companies tackling gender stereotypes in an action-based and creative way. Hopefully, this new toy car will inspire other stakeholders to follow suit because no child should feel pressure to conform to gender norms, especially when it comes to free play.

More Like This
WowWee’s New Fairy Finders Will Keep Kids Distracted For Hours
The Covid Vaccine For Kids Under 5 Has Been Sent To The FDA For Review
Princess Charlotte Is Ready To Be A Soccer Star, Too
North West Flips The Bird During Family Photos