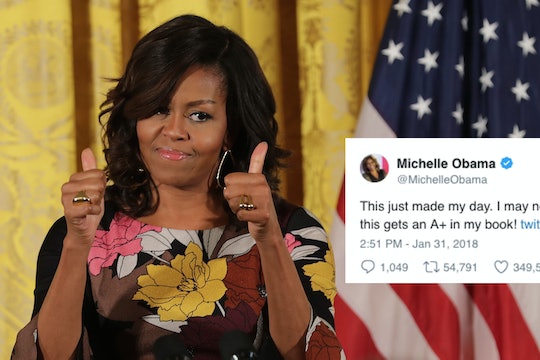 377 days have passed since Michelle Obama and President Barack Obama packed up their things and moved out the White House. It's a sad occasion for a lot of people to remember and personally, it's not something I like to ruminate on for too long. Because whenever I think about Obama, I feel super nostalgic for the old days when she reigned as first lady, a feeling I bet many Americans can relate to. And if you're one of those people who daydream about the White House pre-Jan. 20, 2017, you'll probably feel especially wistful for the Obama administration after you read Michelle Obama’s response to a girl who dressed like her for school.

On Monday, Audrey Dow, a mom and the Senior Vice President of Campaign for College, tweeted a sweet picture of her 9-year-old daughter dressed up as Obama at her 3rd grade Open House.

"Today my 9 year old was @MichelleObama for her 3rd grade Open House project," Dow captioned a photo of her *adorable* daughter standing in front of her project, titled, "Michelle Obama: First lady of the United States." "She was inspired by her work to make sure more kids go to college & #ReachHigher. She loves that Mrs Obama is brown & has hair like hers #ISawMyself."

I think Dow's daughter totally nailed this one.

And shortly after Dow shared the post, Obama tweeted back at Dow, according to CNN:

This just made my day. I may not be a 3rd grade teacher, but this gets an A+ in my book!

Of course, Obama's tweet didn't go unnoticed by her 9.9 million followers and especially by Dow herself.

Dow said of her daughter's response to Obama's sweet note, according to the Daily Mail:

Thank you so much for this! Alexandra is so overwhelmed with all the positive attention. She got so teary-eyed when she read Mrs. Obama's reply. She couldn't believe that she would write something to her. Dreams come true baby girl! #ReachHigher #BetterMakeRoom #goals #isawmyself.

Others had more, ahem, emotional reactions to the charming back-and-forth:

So, why is this tweet in particular generating such a strong response from Obama's followers? I have a few ideas.

For one, it's a big reminder of what's currently lacking in the Trump administration, especially where it concerns education. Although in September 2017 President Donald Trump did direct millions to STEM education, according to Politico, the recently passed tax bill is projected to hurt public schools because it imposes restrictions on state and local taxes, according to The New York Times. Not to mention, I can't think of a consistent education initiative from the Trump administration or an outspoken (I'm not sure Ivanka Trump counts, to be honest) White House official who champions this important topic.

During Obama's time in the White House, however, she launched the Reach Higher campaign, which Dow referenced in her initial tweet with the hashtag, #ReachHigher. The program, which Obama *still* supports, aims to "inspire every student in the U.S. to take charge of their future by completing their education past high school, whether at a professional training program, a community college, or a four-year college or university," according to Better Make Room. And I think it goes without saying that people are nostalgic for a first lady who made it a point to support America's youth with tangible and stable initiatives.

Secondly, I think a lot of people miss Obama's frequent interactions with the public. The current first lady, Melania Trump, is a bit of a mystery, to say the least, and it makes sense that citizens are craving the sense of accessibility they once enjoyed.

And finally, it's probably safe to say that many people miss having a person of color to look up to in the White House. It's no secret that the Trump administration has a bit of a diversity problem, to put it lightly, and it's unfortunate that this issue has yet to be properly addressed.

The silver lining in Obama's departure, however, is that she now has more free time to interact with the public and to pursue her own initiatives outside of the White House. So, don't despair too much. Obama might not be first lady anymore, but it's clear she's still committed to improving America for the sake of kids everywhere.