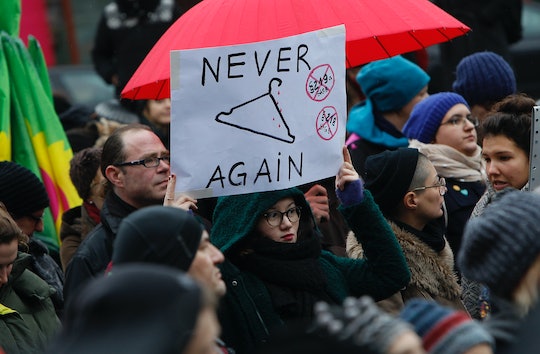 Another State Has Passed A "Draconian" Anti-Abortion Bill

In yet another attack on women's reproductive rights and freedoms, lawmakers in Missouri have passed an anti-abortion bill that includes no exceptions for rape or incest and would ban the medical procedure at eight weeks of pregnancy, ABC News reported. Pro-choice advocates and medical experts are speaking out against the extreme legislation, calling it "draconian" and a clear attack on Roe v. Wade.

The bill, HB 126, passed both the Missouri House and Senate on Friday, and Republican Gov. Mike Parson is expected to sign it into law soon, according to CNN. The anti-choice legislation, dubbed the "Missouri Stands for the Unborn Act," would ban abortion at eight weeks of pregnancy, which is before many women know they're pregnant. According to NBC News, the bill would allow the procedure for "medical emergencies," but it does not include any exceptions for victims of rape or incest.

Though Gov. Parson has yet to sign the bill into law, he is expected to, especially given his past statements on abortion. "Until the day that we no longer have abortions in this country, I will never waver in the fight for life," he said earlier this week at a rally, according to ABC News affiliate WHSV.

"Women across America are still reeling in the wake of Alabama’s abortion ban, and today, Missouri just delivered another blow," NARAL Pro-Choice America President Ilyse Hogue said in a statement on Friday. "Anti-choice politicians, with Donald Trump in charge, are pushing a cruel agenda that puts politicians in between women and their doctors, hurts families, embodies the epitome of government overreach, and aims to send this country backwards to the dark ages."

Hogue continued, "The fight for reproductive freedom is at a tipping point. These extreme bans, which are intended explicitly to undo Roe v. Wade, paint a clear picture for the American people of the future anti-choice politicians want for them. It’s the opposite of the future we’re working to build and it’s certainly not the future the 7 in 10 Americans who support access to safe and legal abortion want to see."

Missouri's new anti-abortion bill follows Alabama passing the nation's strictest ban on abortion in the country. Unlike Missouri's legislation, abortion in Alabama is banned at any stage of pregnancy, according to CNN, and it also doesn't include any exceptions for victims of rape or incest.

These attacks on reproductive health have outraged medical experts who support abortion care. The Missouri Section of the American College of Obstetricians "strongly opposes" Missouri's anti-choice legislation, calling it a "medically unjustified and dangerous bill."

"It represents unnecessary political interference in the patient-provider relationship, granting politicians final decision-making power over individual health care decisions specific to pregnancy with no acknowledgement of its complicated and unpredictable nature," ACOG’s Missouri Section said in a statement on Friday.

The statement continued, "Ob-gyns and other women’s health care providers should not be threatened with criminal penalties for delivering evidence based, necessary health care. HB 126 would force clinicians to decide between their patient’s needs and facing criminal proceedings. All clinicians must be able to practice medicine that is informed by their years of medical education, training, experience, and the available evidence, freely and without threat of criminal punishment."

This latest wave of anti-choice laws and legislation has many concerned about the fate of Roe v. Wade, which made abortion legal and a constitutional right as of 1973. Reproductive health and freedom is certainly being threatened in the United States, and all of this is not sitting well with you, here's how you can support women and those of need of abortion care.

More Like This
Obamas Issue Powerful Statements After Supreme Court Ends Roe v. Wade
This Map Illustrates Just How Many States Would Ban Abortion If Roe V. Wade Is Overturned
Keep Talking To Your Kids About Abortion — It's More Important Than Ever
How Title IX Changed The World For Girls