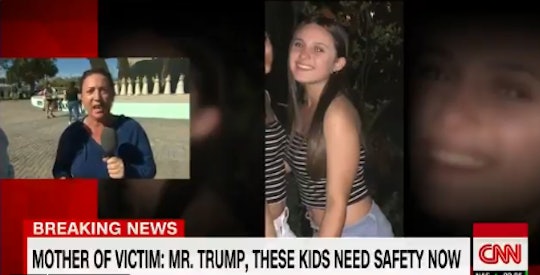 The Mom Of A Florida Shooting Victim Went Off On Trump, & The Video Will Wreck You

A total of 17 people died at a Parkland, Florida high school on Wednesday after a gunman entered the school and opened fire, setting off the fire alarm to draw people out of their classrooms. He killed a football coach, an athletic director, and young students, leaving their families behind to pick up the pieces. What are they supposed to do now without their children? How are they supposed to go on? Following Wednesday's tragedy, one Florida school shooting victim's mom begged Trump to "please do something" about the state of gun safety in the United States.

Lori Alhadeff, mother of 14-year-old shooting victim Alyssa Alhadeff, was interviewed by CNN the day after her daughter lost her life during one of the worst mass shootings in modern history. This time at Marjory Stoneman Douglas High School, a school in Broward County, Florida with a little over 3,000 students outside Boca Raton. Alhadeff was justifiably emotional; as she points out in the video, her voice shaking, she just "spent two hours planning her 14-year-old daughter's funeral."

But this brave, distraught mom wasn't using her moment in front of the cameras to illicit sympathy, she had a specific message for one man in particular: President Donald Trump.

This mother, who lost her only daughter mere hours ago, asked some seriously tough questions in general. Many of which so many parents will be asking in the wake of yet another school shooting where the gunman was able to cause so much devastation in such a short amount of time. According to CNN, she said:

How do we allow a gunman to come into our children’s school? How do they get through security? What security is there? There’s no metal detectors. The gunman, a crazy person, just walks right into the school, knocks on the window of my child’s door and starts shooting, shooting her and killing her!

Her 14-year-old daughter Alyssa was a soccer player, well-loved by her community and friends, according to a Facebook post Parkland Travel Soccer shared in her honor.

Alhadeff went on to direct her question at the person she felt could perhaps change the situation:

President Trump, you say "what can you do?" You can stop the guns from getting into these children’s hands! Put metal detectors at every entrance to the schools. What can you do? You can do a lot! This is not fair to our families and our children go to school and have to get killed! I just spent the last two hours putting the burial arrangements for my daughter's funeral, who is 14! President Trump, please do something! Do something. Action! We need it now! These kids need safety now!

Her plea for change was so powerful that it left CNN correspondent Brooke Baldwin in tears. Because what can you even say in response to such incurable heartbreak?

If this mother is hoping that Trump will see this school shooting as the impetus needed to affect stricter gun control, she will most likely find herself disappointed. Trump's response to the Florida school shooting never mentioned the word "gun" once, and his tweet appeared to blame the victims and those close to the gunman for not notifying authorities about a mentally disturbed person.

When Trump spoke out on Thursday to offer his sympathies to the families of the Florida school shooting victims, HuffPost reported that he said, "No parent should ever have to fear for their sons and daughters when they kiss them goodbye in the morning.”

Whether or not he plans to do anything to prevent this from happening, again and again and again, is anybody's guess. This is the 18th shooting this year, according to CNBC, and it's only the middle of February. Whether he we hear the pleas of mothers who have lost their children... I suppose we'll have to wait and see.