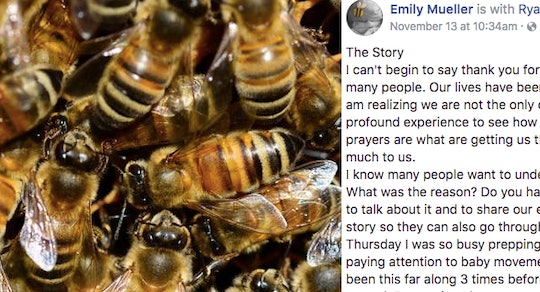 The internet loves a good oddity that wows, and Emily Mueller's maternity shoot with bees, which went viral at the end of the summer, fit the bill perfectly. But the update the Ohio mom shared recently cast a heartbreaking pall over the photos — which feature the then-pregnant beekeeper joyously posing while 20,000 bees covered her belly — in retrospect. What was once a fun viral moment has turned tragic, as Mueller recently shared that she lost her son last week, just days before his due date. At the very least, the family will always have those unique maternity shots to cherish and remember little Emersyn Jacob by as they grieve and begin to heal in light of this devastating turn of events.

Mueller is a professional beekeeper and honeybee rescuer, and she actually got involved in the business as a way to cope after experiencing two miscarriages. She and her husband, Ryan, are also parents to three children, ages 10, 3, and 1. Because she suffered another miscarriage after she started beekeeping, she decided to incorporate the bees into the photos as a way to acknowledge all of her children, telling Cleveland.com at the time that bees symbolize life and death.

Before staging the photoshoot, Mueller discussed it with both her midwife and doctor to ensure that it did not pose a risk to her unborn child, People reported.

When the pics from the shoot first hit the internet, it seemed as though the baby was destined to grow up to be a beekeeper like his mom. Instead, he'll leave a different legacy, one that his mom enshrined in a long and heartfelt Facebook post this week. In it, Mueller explained that she had noticed that she didn't feel the baby moving as she normally did, and became increasingly concerned. When she sought medical reassurance soon after, she learned the "unfathomable." Her little boy, whose due date was just six days away, had died, and she would have to be induced to give birth to him.

When that time came, she wrote, birth doulas trained in bereavement helped her through the unimaginable experience, and an organization called Sufficient Grace Ministries provided services such as newborn photography. Mueller expressed her appreciation in the post:

My heart was able to begin healing from this, from meeting women that have gone through the pain, from having these experiences and feeling more people love our sweet baby. I have so much more to say about our experience, our amazing midwife and the phenomenal nurses we met. They all cried with us. Every. Single. One. Each individual that met us was deeply affected by our loss. They all touched Emersyn, felt him, let him know he was important. My birthing experience was truly amazing and I am thankful for the way he entered the world. You could not deny he was loved by so many people and we continue to see this through the outpour of love and support you all are providing.

Mueller and her husband decided to have her placenta tested in the hopes that they could learn what caused Emersyn's death, but she wrote in her post that she has a pretty strong hunch. She believes that the same blood clotting issue that has caused some of her immediate family members to have miscarriages may also be the culprit here.

In any case, the family's public story once again features some beautiful photography. Sufficient Grace Ministries provided newborn photography, resulting in some heartrending keepsake photos for the family. Mueller's Facebook profile photo right now, for example, is of Emersyn's little feet and bottom clad in bumblebee pants, with the caption: "Our little beekeeper."