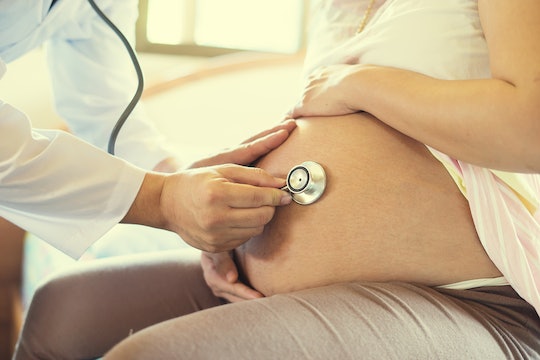 Have a nice day Photo/ Shutterstock

Although this might seem like some kind of riddle at first glance, this story about a 20-year-old mom with two wombs who gave birth twice in one month is the real deal. As CNN reported, the mom in question has a condition called uterus didelphys, a rare diagnosis that often causes no symptoms.

Labor can be a stressful and exhausting experience, and it's not something many people would want to endure twice in one month. But this exact scenario happened to Arifa Sultana, a 20-year-old mom living in Bangladesh, The Independent reported.

Sultana's wild journey began shortly after she gave birth to a son in February 2019, according to The Independent. Although the birth was successful and without any complications, Sultana was back in the hospital 26 days later after complaining of stomach pains, according to CNN.

During an ultrasound examination at Ad-din Hospital, according to ABC News, a doctor by the name of Sheila Poddar noticed something unusual: twin babies. Considering Sultana gave birth less than a month before, the findings were shocking.

"When the patient came in we performed an ultrasound on her and found there were twin babies," Dr. Poddar told the BBC. "We were very shocked and surprised. I have never observed something like this before."

Sultana had no idea she was pregnant with twins, the BBC reported, nor was she aware of her condition. Luckily, the babies were delivered safely and they're in fine health. "She had no idea that she had two other babies," Dr. Poddar revealed to the BBC. "We carried out a caesarean and she delivered twins, one male and female."

So, what exactly is uterus didelphys? Commonly known as "double uterus" this congenital abnormality occurs during the formation of the uterus, according to the Mayo Clinic. The uterus starts out as "two small tubes," and these tubes later conjoin to form one uterus.

In some cases, however, each tube "develops into a separate structure," and a double uterus "may have one opening (cervix) into one vagina, or each uterine cavity may have a cervix," according to the Mayo Clinic. It's common for people with this condition to have a "a thin wall of tissue" that "runs down the length of the vagina, dividing it into two separate openings."

People with this condition can have successful pregnancies, but it can cause miscarriages or preterm labor, according to Healthline.

This condition often doesn't go unnoticed, however, for people who have access to quality medical care. Sultana is from a rural area, according to the New York Daily News, so it's possible this is why she went undiagnosed. "If you go for a scan beforehand it would be very obvious to see two sets of uteruses," Dr. Christopher Ng of the GynaeMD Clinic explained to the BBC about Sultana's case. "But obviously they are from a more rural area [and might not have access to ultrasound scanning]."

Although it's great to hear that Sultana and her babies are doing well, it's unfortunate that many people across the globe lack access to proper medical care. Adequate health care should be a right instead of a privilege.

More Like This
Can Swimming Induce Labor? Experts Weigh In
What You Need To Know About Eating Burrata During Pregnancy
This Is How Your Water Breaks During A C-Section
Can You Do Zumba While Pregnant? Experts Weigh In