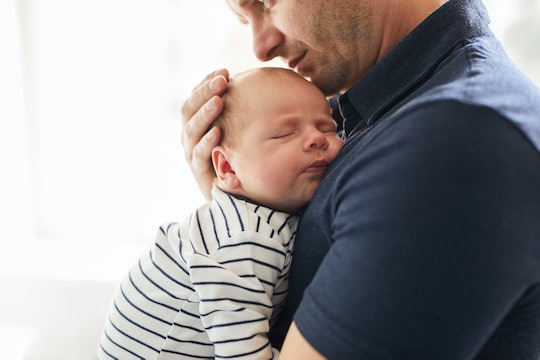 More Dads Might Suffer From Postnatal Depression Than We Thought, Says Study

It's common knowledge that some women suffer from from postpartum depression after giving birth. Feelings of helplessness, despair, and not even being able to get up off the couch are common for women, especially new mothers, and as some people know, in new fathers, too. Although postnatal depression in new fathers isn't talked about too often, it still exists no matter how people try to ignore it. And people shouldn't ignore it, because more dads might suffer from postnatal depression than people thought, according to a new study. New fathers, take note.

It's already well known that fathers do experience postpartum depression, according to Scientific American, and people have known it for quite some time. One 2004 study found that an estimated 50 percent of fathers were affected by postpartum depression when their wife was going through it, too. Another study, published in the Journal of the American Medical Association in 2010, according to Scientific American, found that an average of 10.4 fathers suffered from depression at least some point "between the first trimester of their partner's pregnancy and the child's first birthday."

But, new research conducted at the Indiana University School of Medicine and published in the JAMA earlier this week points to new findings about postnatal depression — it's a lot more common than people would expect. The study, according to ABC News, found that, after being screened for depression across different pediatrics clinics in Indianapolis, Indiana, 4.4 percent of fathers tested positively for postpartum depression, whereas 5 percent of mothers tested positively as well.

Their conclusion? The gap between postpartum depression in mothers and in fathers is smaller than people originally thought.

But, since men suffering from postpartum depression aren't as ubiquitous in media, fathers might not be aware that they are experiencing it themselves, according to MD Magazine. This is exactly why researchers at the Indiana University School of Medicine wanted to publish this new study, especially since there is so much that researchers still don't know about males experiencing postnatal depression. Lead author of the study and Assistant Professor of Pediatrics at the Indiana School of Medicine, Erika Cheng, told MD Magazine:

Although hormonal changes in women are a huge factor for them getting postpartum depression after giving birth, according to the New York Times, a new study published last year found that men's testosterone levels drop after their partner gives birth, explaining why men might get postpartum depression when they welcome their new child.

Because a stigma still exists, people might not take fathers suffering from postpartum depression seriously, and it's a problem. On Facebook, users weren't too kind towards the idea that men might also be going through postpartum depression — which is another reason why the stigma needs to be over. "I just don't buy that men are having postpartum depression!," one commenter wrote. "I'm sorry but they did not carry that baby for nine months with their body changing and creating hormones."

"He's depressed because he isn't getting any for another six weeks," another commenter wrote.

This is just another reason for this new study and why these findings are so important, Cheng told MD Magazine:

It's important to de-stigmatize men's mental health and increase our awareness of depression in fathers in the postpartum period. The fact that so many new dads are experiencing this is significant because depression can have serious consequences if left untreated. We know that dads who are depressed are less engaged with their kids, which can lead to cognitive and behavioral problems.

Although the researchers were able to find some extremely important and relevant information about postnatal depression in dads in this new study, it is important to note that there are still so many steps that can be taken to end the stigma of postpartum depression in men and bring awareness to this issue, according to ABC News. Plus, it's easier for women to be screened for postpartum depression, based on the amount of doctors visits they make with their newborns alone, according to Scientific American.

Bottom line? Fathers to newborns should be screened for depression, in addition to women, because it's likely that they could be suffering from postnatal depression, as well. These increased percentages in this new study are proof of that.