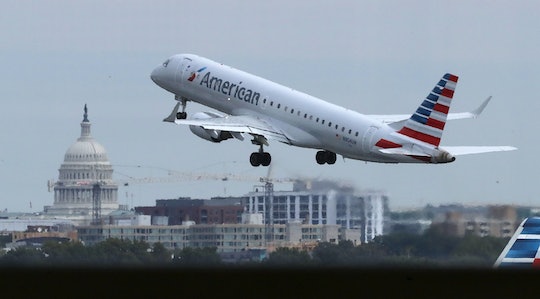 Traveling is already pretty stressful, even when everything goes according to plan. The stress associated with traveling home to see friends and family during the holiday season is even worse. This, combined with a reported "system malfunction" from one airline might only make things worse when you go home for the holidays in just a few weeks. Don't start panicking — but according to Yahoo, more than 15,000 American Airlines flights over the holidays reportedly don't have an assigned pilot, making things a lot more stressful for impending travelers. Romper reached out to American Airlines' Media Relations team and is awaiting a reply.

On Wednesday, it was revealed, according to NBC News, that thousands of flights during the holiday period are pilot-less due to a computer error and scheduling glitch which allowed the pilots to take the holidays off. But this doesn't mean that the flight you've had booked with American Airlines for the past few months will be canceled.

According to NBC News, the airline is working to address the issue and passengers can "expect to avoid cancellations." American Airlines told NBC News, in a statement:

We have reserve pilots to help cover flying in December, and we are paying pilots who pick up certain open trips 150 percent of their hourly rate — as much as we are allowed to pay them per contract. We will work with the APA to take care of our pilots and ensure to get our customers where they need to go over the holidays.

If a "computer glitch" is too vague of a term for you, there is a long-form explanation for this, according to Yahoo. The application used to schedule American Airlines pilots reportedly did not make these holiday flights mandatory, according to Yahoo. This allowed pilots to drop and trade the flights at will, giving them more time to spend with their families at home during the holidays, instead of working their normally mandatory scheduled flights. According to Yahoo News, when some pilots saw that they were able to have the holidays free, they rightfully took advantage of the opportunity. But those flights — to get everyone else home to their loved ones — have to be filled, too.

This is, understandably, a little bit of a problem. According to MSNBC, American Airlines is the largest airline in the world. And this glitch effects flights heading in and out of major cities and travel destinations, like New York City, Miami, and Boston, among others. In response, according to the Dallas Morning-News, the airline will have to rebuild its staffing schedule completely.

The system "became Santa Claus" to airline workers, according to NBC News. "The computer said, 'Hey y'all. You want the days off? You got it,'" Dennis Tajer, an American Airlines captain and union spokesman told MSNBC. While this is the kind of holiday treat most employees would want from Santa, it isn't necessarily so much of a treat for the airline or holiday travelers.

But people on Twitter aren't panicking. They're using the moment to share some pretty fantastic memes and tweets and make light of one slightly upsetting situation.

As if the holidays weren't stressful enough, this reported computer glitch certainly doesn't help. But no one ever said that the holidays are always supposed to go according to plan — and can you imagine how great of a topic this will make at your family's Christmas party?