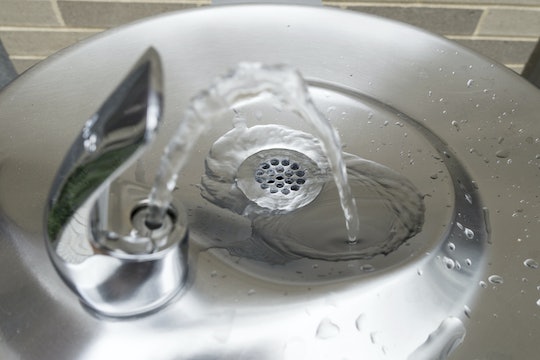 Thanks to the phaseout of lead paint and lead-based gasoline, the number of children with high blood lead levels have dropped significantly over the past four decades. Yet, even with this phaseout, kids in the United States still face a high chance of lead exposure, especially while in school. Why? Because, it turns out, most public schools don't check for lead in water, according to a shocking new government study, risking the health of millions of youth.

A report released this week by the U.S Government Accountability Office found that less than half of school districts nationwide, serving 35 million students, tested school water for lead in 2016 or 2017, according to the Huffington Post. And of the 43 percent of districts that checked, 37 percent found elevated lead levels in water, the Huffington Post reported.

But more alarming: More than 40 percent of public schools, serving 12 million students, failed to check their drinking water for lead either year, the GAO report showed. The rest of the districts — around 16 percent — reported not knowing whether or not they did lead testing, according to the study.

"It’s really upsetting that to this day, the lead problem still exists in our country," Olga Naidenko, senior science advisor at the research and advocacy organization, Environmental Working Group, tells Romper. "The toxicity of lead has been known for a long time. This is not a new story."

Although all water systems are vulnerable to lead contamination, school districts are especially so — and for a few reasons.

There are two main sources of lead, Naidenko tells Romper: The water service line, and plumbing equipment. For one, most public schools use lead-containing pipes that were installed prior to Congress banning use of the hazardous chemical in plumbing in 1986 according to the GAO report, which was put together at the behest of a group of Democratic lawmakers. This is particularly true for school districts in older cities like New York, Baltimore, and Boston, she says.

Secondly, schools usually have a long line of service between their faucets and the water main under the street that they're tapped into, Governing reported. That means water has further to travel to a faucet, increasing the chances that lead contained in those pipes will leach into the water supply because of corrosion.

"It used to be that lead was quite common in pipes and fixtures," Naidenko tells Romper.

Not only that, but breaks in the school year mean buildings remain unoccupied for long periods, leaving water sitting in the systems. When water stops flowing, even for several hours, there's more of an opportunity for lead contamination, according to the U.S. Centers for Disease Control and Prevention.

Schools built in the last few years have less of a chance of having a lead problem, Naidenko tells Romper, but they're still not completely free of risk. Up until five years ago, "lead-free" plumbing materials, such as water fountains and fixtures, were allowed to contain up to 8 percent of lead, according to the GAO report. Congress wouldn't lower the maximum allowable lead content in plumbing until 2011, when it passed the Reduction of Lead in Drinking Water Act, but that law didn't go into effect until 2014.

That means that, even those newer plumbing fixtures are far less likely to leach lead, there's still a possibility, Naidenko tells Romper. "If we don't test, we don't know," she says. "It's essential that parents demand that schools do the testing."

That's especially important, Naidenko says, because even after the ongoing water crisis in Flint, Michigan exposed the hazards of lead contamination, there's still no federal law that mandates public schools to check their drinking water for lead. And as of 2017, only eight states have requirements for lead testing in schools, according to the GAO report. Another 13 states have allocated funding to districts who voluntarily check drinking water for lead.

Even if all states require schools to test their drinking water for lead, there are still federal regulations to contend with — and those regulations are outdated, says Naidenko.

A study published this year in the journal Criminology found that low lead exposure can lead to a decreased IQ, a lack of impulse control, and poor performance in school. Other adverse, long-term health effects from low exposure include delayed learning, hypertension, and kidney damage.

Acute exposure to very high levels of lead, on the other hand, can cause encephalopathy, which refers to brain disease, damage, or malfunction, according to the CDC.

“Lead is especially toxic for children’s health because children are less able to tackle this very important chemical, which is harmful for the developing brain," Naidenko tells Romper.

In 2012, the CDC adjusted its threshold for high blood lead levels in children from 10 to 5 micrograms per deciliter. The change in the threshold, according to the CDC, is more reflective of the half a million U.S. children between 1 and 5 years old who have blood lead levels about 5 µg/dL.

But, as the GAO report revealed, there's a long way to go to eliminate lead in schools, where children "spend many, many hours, and maybe drink many times a day," Naidenko says.

Parents, she continues, have to be advocates for their children and "make sure school districts are not hiding their heads in the sand."

That could mean directly addressing school administrators, and being present for lead testing, which should happen at the start of the day before faucets are flushed, Naidenko tells Romper. Or it could mean petitioning elected officials to pass state and local laws, and to hold their school districts accountable for keeping students safe from lead.

The EWG also runs a national Tap Water Database, launched last year, that serves as a comprehensive source on the quality of drinking water in the United States. Users who visit the database can enter their zip code or name of their local utility for a list of all contaminants found in tests and reported to state or federal authorities.

"We know how to solve this problem," Naidenko tells Romper. "It’s simply about putting resources where they need to go. Parents are a major force in making sure their children are protected from lead."