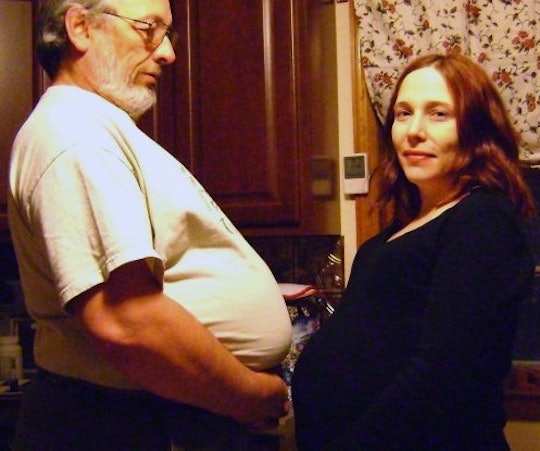 To be honest, I’ve never really been a fan of Thanksgiving. There’s always so much pressure to have a perfect holiday meal with your family, which, in my experience, culminates in at least one person losing their cool or leaving the table in tears. When I was pregnant with my daughter I was that person. I found the entire day to be an intrusive, infantilizing, anxiety-inducing nightmare. From super-personal questions about my body and pregnancy to family members actually trying to police my Thanksgiving meal, Turkey Day became nothing more than truly unbearable day.

When I was pregnant with my first I attended not one, but two Thanksgiving meals. I had just overcome the worst of my morning sickness and, as a result, was more than ready to have some pie and actually enjoy food I could physically keep down. And since I was pregnant I figured I could finally eat what I wanted, and how much I wanted, without anyone commenting on my weight or mocking me for being a vegetarian. Sadly, I wrong.

I felt like my growing body, and the choices I made about what to eat and not to eat, were under a microscope the entire day. On a day that was supposed to be about food and family and thankfulness, I learned I very difficult rule: people feel entitled to share their opinions about your body, your health, and your diet when you're pregnant. Regardless of how those opinions might make you feel.

Instead of sitting at the dinner table and enjoying a meal, I had to endure shaming comments about the contents of my place. I heard things like, "Are you sure you want to eat that?", which made me question the safety of the baked Brie I was finally able to enjoy (and had been craving for months). I was so worried, in fact, that I considered calling my midwife during Thanksgiving dinner to make sure what I was consuming was safe. (For the record, I asked her at my next appointment and she said I was fine.)

I had thought that being pregnant during the holidays would be so much fun. Instead, I spent the majority of my time crying and wishing I could just vanish into thin air.

When I helped myself to a plate of mashed potatoes, salad, and green bean casserole, my dad asked me if I was finally going to eat some turkey "for the baby." I know he didn’t mean any harm, especially since he has teased me constantly (and since I was 12) for being a vegetarian. Hell, I can usually ignore his comments entirely or throw a joke back his way. But hearing my own father question my dietary choices when I was pregnant, and in almost an accusatory way, transformed his probably harmless comments into hurtful, pointed words. I felt as though my father was implying that I was harming my baby by eating (or in my case, not eating) certain foods. Instead of joking back, like I had always done on Thanksgiving, I bit my tongue and excused myself to the bathroom to cry.

Thanksgiving dinner at my in-laws' was even worse, though. When my husband's aunt asked if I wanted pie or cheesecake for dessert, I smiled and said, “Why not both?” My mother-in-law immediately chimed in and said, “You know, you aren’t actually eating for two, right?” My cheeks flushed and I laid down my fork, unable to bring myself to finish my pie... on Thanksgiving.

It didn't stop there, either. I heard questions about how much weight I had gained already, because apparently my belly was "huge." I was on the receiving end of dirty looks for daring to try a sip of my husband’s microbrew. I was even compared to a grizzly bear bulking up for hibernation. When I took a sip of my coffee my mother-in-law asked if I had heard that caffeine can cause miscarriages. I wanted to reply with a sarcastic comeback, because her comment was beyond inappropriate, but I was at a loss for words and unable to form anything resembling a coherent sentence. So again, for the second time on Thanksgiving, I excused myself to the bathroom and cried.

Bodily autonomy doesn't go away when you get pregnant.

I had thought that being pregnant during the holidays would be so much fun. Instead, I spent the majority of my time crying and wishing I could just vanish into thin air. Instead of enjoying my mashed potatoes and pie, I felt ashamed, anxious, and alone. And while it has been years since that pregnancy and that fateful Thanksgiving day, the experience ruined the holiday for me. I cannot, and will not, forget how my family made me feel.

In retrospect, I think it’s pretty sad and infuriating that we, collectively as a culture, treat pregnant women the way we do. When we're pregnant we're scrutinized and shamed no matter what we do, made to feel responsible for having a perfect pregnancy and doing all the "right things," but also subjected to people’s often conflicting opinions on what exactly a "good" pregnant person should do, or, as I learned that Thanksgiving, what they choose to eat.

Bodily autonomy doesn't go away when you get pregnant. People have to stop treating pregnant people like they are toddlers who don't know how to make healthy choices about food, and instead recognize that they are adults who can eat what whatever they want, whenever they want. And, yes, that includes on Thanksgiving.

More Like This
What You Need To Know About Costco’s Fourth Of July 2022 Hours
What To Know About Trader Joe's Hours On Fourth Of July
Delicious Juneteenth Recipes Your Whole Family Will Love
Can Babies Hear Fireworks In The Womb? Here's What Experts Say