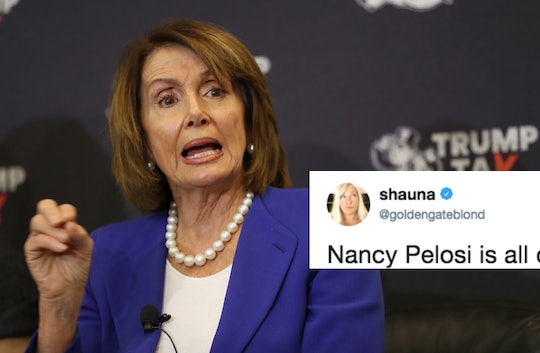 On Tuesday night, President Donald Trump delivered his first State of the Union address to Congress. Needless to say, there were a lot of *amazing* reactions to Trump's speech, but the look on House Minority Leader Nancy Pelosi's face at the State of the Union definitely stole the show. In fact, I think it's safe to say that Pelosi is literally all of us right now.

The State of the Union address is a big event, to say the least, but Trump's speech received a special amount of attention in the days leading up to the actual moment. Many political pundits, and Americans, wondered what the heck Trump would say and if there would be any jaw-dropping moments. Because mayhem and confusion is pretty much par for the course in Trump's universe, right?

But somehow, Trump managed to stay on message for once (*slow clap*) and the speech was delivered without many hiccups. Still, not many people in the audience were impressed, including Pelosi.

Pelosi, who has butted heads with Trump on a variety of issues this past year like the fight over Deferred Action for Childhood Arrivals (DACA), looked like she was simmering with rage the entire night. I mean, who can blame her? Pelosi and Sen. Chuck Schumer, a democrat from New York, have worked tirelessly this past year to find common ground with Trump, only to be shut down time and time again. So, I can only imagine that Pelosi was seriously annoyed to hear Trump wax poetic about unity and whatnot for an hour straight.

Not to mention, Pelosi had the difficult task of setting an example for fellow democrats in attendance. Pelosi supposedly told members of her party not to disrupt Trump during his speech, according to Politico, and to let him be the center of attention.

“Let the attention be on his slobbering self,” Pelosi reportedly said, according to Politico. “If you want to walk out, don’t come in.”

So, I can only imagine that it must have been quite tough for Pelosi to maintain her composure, and to be the adult in the room, while Trump went about his address. And as any person who has ever been *extremely* frustrated before knows, it's hard to keep your feelings bottled up, especially when you have a lot of eyes trained on you. In short: Pelosi's face said everything she couldn't say out loud... at least in that moment.

But most of all, Pelosi's facial expression was the perfect representation of each and every American who uttered WTF in response to one of Trump's many troubling (and confusing) talking points during the address. To say Pelosi was all of us on Tuesday night is putting it lightly, to say the least. I think it's even more apt to say that Pelosi's expression of pure annoyance, frustration, and overall disdain is the perfect visual representation of every single day since Trump took office in January 2017.

And as for what Twitter thought of Pelosi's look throughout the speech, it also had a lot of thoughts:

Unfortunately, some other people decided to take the opportunity to bash Pelosi, too, which is totally unfair:

Of course, it goes without saying that the low blows are out of line. And what did people expect Pelosi to do throughout the speech instead? Smile? I think Pelosi's reaction is the reaction any Democrat would have to all the nonsense that has occurred, and continues to occur, in the Trump administration. Not to mention, it's not like Trump has been super respectful to Pelosi throughout the past year. Trump sarcastically refers to Pelosi and Schumer as "Chuck and Nancy," for crying out loud. Respect is a two way street, people.

But back to the good stuff aka Pelosi's *incredible* facial expression. Pelosi's searing look during the State of the Union address is not only a perfect metaphor for what Americans are feeling right now, but it's also an expression of resistance. It's crystal clear that Pelosi is not here for Trump's nonsense.