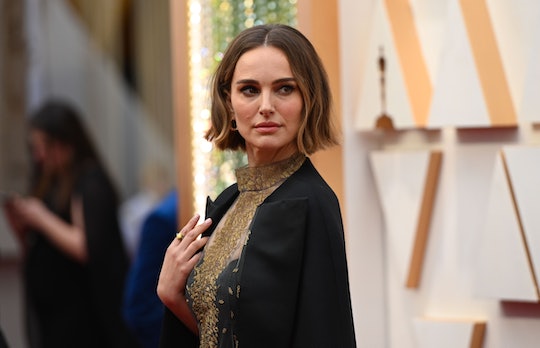 Natalie Portman Wore An Intense Subtweet About Sexism To The Oscars

And the male nominees are...

It's no secret that the Academy Awards often overlook powerful female and minority performances, but one celebrity used her appearance on the red carpet to raise awareness of a major blindspot. Natalie Portman honored the female directors snubbed at the Oscars, wearing a Dior cape embroidered with the names of directors overlooked in the 2020 nominations.

Amy Kaufman of the Los Angeles Times posted a video of the outfit showing the names of Lulu Wang, Greta Gerwig, Lorene Scafaria, Marielle Heller, and Mari Diop, and others.

“I wanted to recognize the women who were not recognized for their incredible work this year in a subtle way,” Portman said in the video.

There was a lengthy list of female directors who the Academy opted to omit from their nominations and Portman wasn't taking the lack of representation lying down. Keeping in line with her history of speaking out against female award snubs, Portman made her opposition known.

This isn't the first time that Portman has called out all-man nominee slats. Back in 2018, while presenting at the Golden Globes with she referenced the "all-male" nominees, and created a ripple of gasps and applause across the audience.

As she told the Los Angeles Times, she was looking for a way to honor the powerful women who were not honored at the Oscars. I'd say her cape statement succeeded — even slayed.