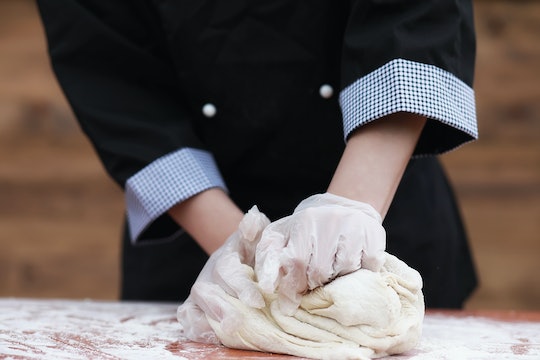 It seems like there's a new recall every week this year, and this week is no exception. Once again, it's time to check your cupboards because a popular baking ingredient could make you very, very sick. A new flour recall has been announced after several people in eight states have gotten sick due to E. coli.

The popular discount grocery chain, Aldi, has recalled five pound bags of its Bakers Corner All Purpose Flour after an E. coli outbreak left 17 people sick in eight states, according to NewJersey.com. The recalled bags have the UPC code, 041498130404, according to the CDC. If you frequently shop at Aldi, you should check your cabinets and flour bags immediately to make sure you don't have a potentially hazardous item in your kitchen.

The affected flour, produced by ADM Milling Co. in Buffalo, New York, was sold in retail stores across 11 states: Connecticut, Delaware, Massachusetts, New Hampshire, New Jersey, New York, Ohio, Pennsylvania, Rhode Island, Vermont, and West Virginia, according to a statement from the CDC. Though these stores are specifically in the northeast of the United States, it is always worth checking the items you have in your own as a precaution.

“Out of an abundance of caution, Aldi has recalled all best if used by dates and all lots of Bakers Corner All Purpose Flour products produced by ADM Milling Co. in Buffalo, N.Y. from store shelves in these states,” Aldi said in a statement.

Consumers are being urged to throw away the affected flour or return it to their local Aldi store for a full refund, according to the Company. If you have flour in a container and are no longer sure of the UPC code, this should be thrown away as well as an extra precaution, according to the CDC. Containers should then be washed thoroughly with soap and hot water.

E. coli cases traced back to the flour happened between Dec. 11, 2018 and April 18, 2019, according to New Jersey.com. Two people were reportedly hospitalized.

So how does flour contract E. coli? Flour is made from milled wheat, and that wheat may have been exposed to bacteria during the harvesting process, according to the CDC.

Another major E. coli scare occurred last week, when 62,000 pounds of raw beef were recalled right before Memorial Day, according to USA Today. This time, the beef recall included much more than just hamburgers, as short ribs, ribeyes, and briskets were affected as well.

When certain strains of E. coli, or Escherichia coli, are contracted, it can cause severe abdominal cramps, bloody diarrhea and vomiting in the affected person, according to The Mayo Clinic.

According to the Minnesota Health Department, symptoms of E. coli infection show up two to five days after exposure. Symptoms can last anywhere from five to ten days. While some cases will clear up on their own, others will need treatment by a doctor.

While it seems like the recall blows keep coming, consumers can stay safe by reading up on best cooking practices and practicing good hygiene inside and outside of the kitchen. As for your cabinets and fridge, you can always find a full list of recalled items on the CDC website. Giving that list a look every so often wouldn't hurt. Better safe than sorry is a good motto when it comes to food safety.