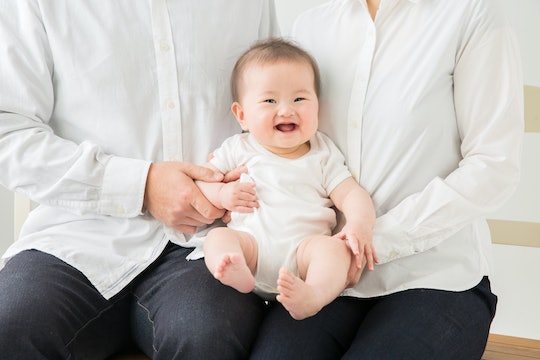 A new study confirms something many moms have long known, but maybe haven't always discussed: When the consequences of having a newborn break, they don't break even. After all, a new dad, even the most helpful one, didn't just go through nine months of pregnancy, followed by childbirth, only to go home to face the brand-new, full-time job that is parenting an infant. No wonder that a new study says sleep and exercise affect new moms differently than new dads... and which parent do you think has the harder time?

As Science Daily noted, a team of Penn State researchers have concurred with previous wisdom that increased exercise and sleep will help a couple maintain their health, not to mention face the challenges of being in a relationship and raising a young family.

But exactly how such factors affect those coping with new parenthood seems to differ across genders, with breaking research showing that new moms fared better with more sleep, while new dads who slept more than average reported feeling less happy and having a decreased personal connection with their spouse and offspring, the website added.

If that weren't puzzling enough, another head scratcher coming out of the new study was the fact that, on days when a mother exercised more than usual, there was a higher chance of a fight between the couple... But when it was the dad who worked out, there was less of a chance of an argument between a couple. Huh?

The fresh data, which arose out of work at the Edna Bennett Pierce Prevention Research Center at Penn State University, is thought to be one of the first to examine how an individual's level of stress, and ability to be resilient, will affect their daily experience as a new parent, as the Penn State News website detailed.

The findings, which were published in the academic journal Monographs of the Society for Research In Child Development, noted the seemingly-miraculous period in which a baby is developing quickly is also an incredibly stressful time for new parents. Which is quite the irony, the study's lead author, as per Science Daily.

"In general, new parents report higher levels of stress, depression and couple conflict," said research professor and health and human development expert Mark Feinberg, as per the Philly Voice. "Ironically, it's also the period when children are most vulnerable, when their brains and regulatory systems are rapidly developing to set the stage for their functioning for the rest of their lives, and when they are most dependent on parents for consistent affection and support."

This paradox not only leads to conflict between an overtired new mom and dad, it can also help explain some of the seemingly random results of the research, Feinberg noted in the publication.

For example, he theorized that "fathers may resist or feel resentful when mothers spend more time than usual on their own needs such as exercise, leaving fathers to pick up more responsibility for childcare — leading to arguments."

To complete their analysis, researchers used information from over 100 moms and dads taken 10 months after their child's birth, Science Daily noted, with researchers polling the moms and dads separately by phone every night for eight days to gather info about the past day in their new family's life.

The new study tracks with slightly older research noting that moms, in general, battle the clock, including a study reported by CBS This Morning from two years ago that among women 45 and younger who have kids, only 48 percent are getting the recommended seven or more hours of sleep per night.

The new info underscores the need for a better understanding of how early parenting affects people, as researcher Feinberg concluded to Penn State News, with the goal being better support and more information for parents during this challenging time.

"Most parents already have a good place to start from at least on some days, so it's a matter of figuring out what works on those days and then doing more of that," the professor told the website.

Yes and yes. Even after surviving three kids, it is still mystifying to me how my husband and I got through it. And it's aggravating to look at the lack of societal support from the perspective of being a mom who once felt so desperate, I considered advertising for a "fake grandma." More attention to this issue, please.