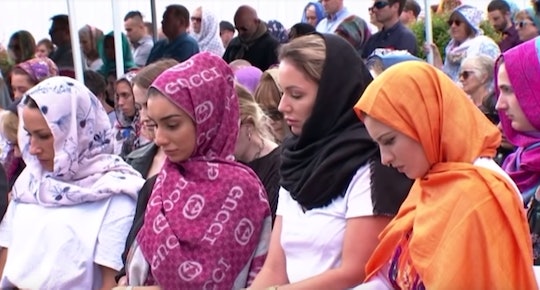 New Zealanders Are Wearing Headscarves In Solidarity After Christchurch Attacks

One week after New Zealand's deadliest mass shooting, semi-automatic rifles have been banned, changes to gun legislation are being written, and a country continues to mourn. It's a trying time, for sure, as citizens attempt to make sense out of the senseless killings. However, instead of dividing them as a nation, this act of terror is bringing them closer together. That's because New Zealanders are wearing headscarves in solidarity after the Christchurch attacks — and it's so powerful.

On Friday, March 15, a gunman from Australia opened fire inside two different mosques in Christchurch, New Zealand — resulting in the most devastating mass shooting in the country's history, according to CNN. A total of 50 people were killed, with another 40 injured. By Thursday, March 20, New Zealand Prime Minister Jacinda Ardern announced a ban on semi-automatic weapons. “On 15 March, our history changed forever. Now, our laws will, too,” Ardern said, according to The Washington Post. “We are announcing action today on behalf of all New Zealanders to strengthen our gun laws and make our country a safer place.”

The very next day, thousands of New Zealanders donned headscarves — and many also attended Friday prayer for the first time — to show support for their Muslim brothers and sisters in a movement dubbed "Headscarf for Harmony."

According to ABC News, the Headscarf for Harmony movement was led by a medical doctor, Thaya Ashman, of Auckland. Ashman came up with the idea after hearing a Muslim woman on the news say she was too afraid to go outside after the attacks because she wears a hijab. "This is a headscarf which both women and men throughout the world, have been wearing since time immemorial," Ashman told ABC News. "It's a simple invitation to the whole of New Zealand to show our support, but also to recognize our grief as New Zealanders." She continued:

We have to change the rhetoric in our countries to move towards each other, with gentle gestures and heartfelt kindness, to create the space to hear each other's stories, to discover our similarities, build relationship, make our streets safe for each other and deliberately and determinedly choose to live in harmony.

New Zealanders took to social media on Friday, March 22 to share photos of themselves wearing hijab alongside the hashtag #headscarfforharmony. One Twitter user wrote, "I stand with our Muslim community today and against hate and violence of any kind."

Another Twitter user wrote, "I have to admit I was a bit nervous stepping out like this today. But I am doing it out of #arohanui."

Yet another New Zealander tweeted, "#HeadScarfforHarmony We support our Muslim brothers and sisters."

Another person tweeted, "Wearing a headscarf to uni as a show of support and solidarity with the many Muslim women who are routinely harassed for the act of following their faith. I will work hard to help raise up your voices in any way I can #HeadScarfforHarmony."

The response has been equally as uplifting. One Twitter user wrote,"Dear New Zealanders. As a Muslim from Malaysia, I’m overwhelmed. Never saw this kind of solidarity ever in my life - the vigils, the haka performances, the scarves. It’s just amazing and heartwarming.Thank you.#HeadscarfForHarmony."

Yet another person tweeted, "After seeing the photos of the non-muslim’s women wearing the hijab to support Christchurch attack i’’m crying like super crazy this is overwhelming thankyou so much and yes humanity always wins #HeadScarfforHarmony."

It's worth noting that just one day after the attacks, Arden herself wore a headscarf while visiting members of the Muslim community in Christchurch. Wearing hijab was “a sign of respect,” Iranian-American journalist and commentator Negar Mortazavi tweeted, according to The Washington Post.

As horrific as this act of terror in New Zealand was, I'm seriously in awe of this nation's response. Actual action and change is happening in the wake of a mass shooting — instead of just arbitrary messages of "thoughts and prayers." Perhaps the U.S. should follow suit.