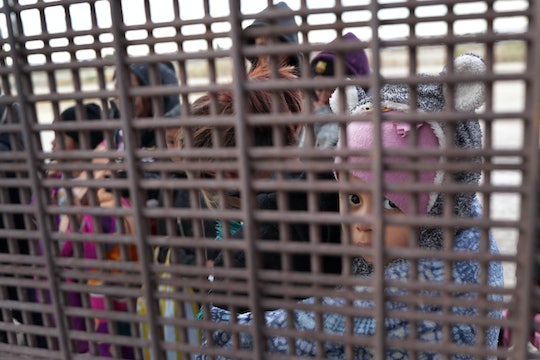 On June 13, Esquire magazine published an expert-backed piece that compared detention centers at the U.S.-Mexico border to concentration camps, an opinion New York Rep. Alexandria Ocasio-Cortez agreed with on Twitter. Now a major newspaper in Utah has said migrant detention centers are "concentration camps for refugee children," stating its case in a straightforward and compelling argument.

It's possible some people are outraged by the comparison of concentration camps to U.S. detention centers because they aren't familiar with the term's technical definition. Andrea Pitzer, author of One Long Night: A Global History of Concentration Camps, defined a concentration camp as "mass detention of civilians without trial" in her interview with Esquire.

Waitman Wade Beorn, a Holocaust and genocide studies historian and a lecturer at the University of Virginia, told Esquire that concentration camps are designed to "to separate one group of people from another group" because these persons are deemed "dangerous or undesirable in some way."

Given the Trump administration's charged rhetoric regarding immigrants and asylum-seekers and the reports of U.S. Immigration and Customs Enforcement "illegally" detaining minors, according to HuffPost, the comparison seemingly tracks.

Then there are reports of inhumane conditions at the detention camps, as The New York Times reported, including accounts of children caring for babies, overcrowding, and a lack of basic hygiene necessities, all of which arguably fit the concentration camps narrative.

Acting Immigration and Customs Enforcement director Mark Morgan and U.S. Customs and Border Protection (CBP) did not immediately respond to Romper’s requests for comment regarding the concentration camp comparisons.

A little over a week after Esquire published its report, Utah's largest newspaper, The Salt Lake Tribune, released a compelling argument via its Editorial Board explaining why the Trump administration's detention centers are "concentration camps." The board argued that, while these centers might not line up with what the public thinks concentration camps are supposed to look like (think the Holocaust), these centers are operating as such.

"They are not work camps. They are not death camps. At least, not on purpose," the op-ed stated in its article, "Yes, We Do Have Concentration Camps."

It continued, "Our government is not building massive gas chambers and industrial crematoria. It is not conducting sick medical experiments on members of an unfavored class... But that does not mean that the places into which we are herding tens of thousands of migrants, refugees and asylum-seekers are not properly called concentration camps. Because that is precisely what they are."

The board also pointed out that, as numerous historians have noted before, that the Holocaust and similar crimes "did not arrive overnight."

"It worked its way up, from nasty political speeches (check) to politicians seeking and gaining power with promises to protect the purity of the nation from foreign invasion (check) to denying basic human rights and decency to people of an unfavored class (check)," the newspaper's editorial board stated. "The same warning is being raised by past residents of the internment camps — concentration camps — in which we confined Americans of Japanese origin or descent during the dark days of World War II."

Actor and activist George Takei echoed this opinion in a tweet shared on June 18. "I know what concentration camps are," he penned. "I was inside two of them, in America. And yes, we are operating such camps again."

The board then highlighted the reported conditions in the centers, stating: "The people being held there are cold, hungry, dirty and often sick. Children are separated from parents. Children are caring for children. Medical care is not to be found. A few — not millions, but a few — have died."

A total of 24 immigrants have reportedly died while in ICE custody during the Trump administration, according to NBC News.

The Salt Lake Tribune's Editorial Board ended its op-ed with a passionate plea to the public. "Good, caring, moral Utahns, and their elected representatives, should be shouting bloody murder over this extended and deliberate abuse of human rights," it argued. "If nothing else, our separation-of-powers expert, Sen. Mike Lee, should be demanding congressional oversight and authorization of what is and isn’t happening."

The board concluded, "Our nation is operating concentration camps for refugee children. We need to stop denying that and decide if we are comfortable with that fact. And how we will explain it to our children."

Whether you support the concentration camps comparison or not, many can likely agree that what's happening at the U.S.-Mexico border is inhumane and unacceptable, especially where it concerns children.