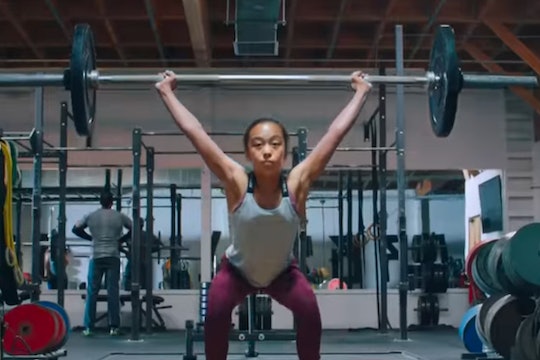 If you used the commercial breaks during last night’s Oscars telecast to refill your snack bowl, you might have missed this poignant ad that proved the Super Bowl isn't the only television event with big time commercials. In fact, some are saying it was the best part of the whole night. That's because Nike's new 90-second ad with Serena Williams sends a powerful message to not only aspiring female athletes, but all women.

Last night, Nike debuted a 90-second ad, entitled "Dream Crazier," voiced by and featuring Serena Williams, among other sports phenoms, according to Mashable. Tackling the gender-based double standards women face in the sports world, the ad is part of Nike's big push before the start of the Women's World Cup Soccer Tournament this summer, according to CNBC.

With appearances from the gymnast Simone Biles, snowboarder Chloe Kim, fencer Ibtihaj Muhammad, and 15-year-old football player Sam Gordon, the ad featured some powerful imagery that spoke to the fearlessness of women athletes, according to AdWeek.

"Dream Crazier" is the follow-up to Colin Kapernick's "Dream Crazy" ad, which aired in September. While it might have garnered backlash from some, it was responsible for an uptick in online sales for days after its release, according to NBC News. It's still too early to see if this ad will have the same effect on sales.

In the ad, Williams flipped phrases that are usually meant to put women down, into inspirational statements.

Williams says in a voiceover:

If we show emotion, we're called dramatic. If we want to play against men, we're nuts. And if we dream of equal opportunity, delusional. When we stand for something, we're unhinged. When we're too good, there's something wrong with us. And if we get angry, we're hysterical, irrational or just being crazy.

The last statement is a reference to her own comeback after giving birth to her daughter and enduring a slew of pregnancy related health problems, according to CNN.

The ends with Williams saying this: "So if they want to call you crazy, fine. Show them what crazy can do."

Williams is no stranger to these double standards. Back in September, she was reprimanded for calling a ref "a thief," after he called multiple game violations against her during a heated game with opponent, Naomi Osaka, according to Global News. Her outburst was nothing more than what her male counterparts, like Jared Donaldson, have done, but made national news nonetheless, as Global News reported.

"Today, we are at a turning point for women in sport," Rosemary St. Clair, vice-president of Nike and general manager of Nike Women, said in a statement on Friday. "The definition of sport has broadened overall; we recognize that the same lessons in self-esteem and confidence that come from participation in traditional sports also come from yoga, boutique fitness, functional fitness and so much more."

St. Clair is a huge advocate to the plight of women in sports. According to her statement released last Friday, she worked on an important marketing campaign ahead of the 1999 Women's World Cup where she wanted to encourage parents to take their daughters to soccer games.

"We wanted to create momentum, so we worked hard to encourage parents to take their daughters to games. Honestly, we weren't sure it was going to work. But, it did. Then-10-year-old Alex Morgan, now leading the U.S. National team into this summer's tournament, is firm testament," St. Clair said in the same Nike statement.

Understanding women's needs in the sport's industry has become a major focus for Nike in recent years affecting their day-to-day decisions in the sports science labs and marketing teams, according to CNBC. For example, in 2017, Nike launched a "performance" hijab to encourage more Middle Eastern women and girls to play sports, as USA Today reported, which noted that the "Dream Crazier" ad shows the Muslim American fencer Ibtihaj Muhammad competing in one.

It's a sure bet that this won't be the last viral ad sports fans see from Nike. As spring and summer sports start to ramp up, the sporting giant likely has more surprises in store, hopefully ones that continue to bring light to the amazing talents of women athletes.