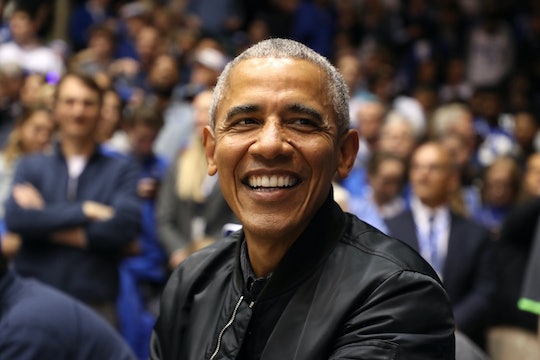 Obama's Sweet Easter Message Is Everything You Need To See Today

Easter is here and people are celebrating by gathering with family and friends. Throughout the day, celebrities and political figures have taken a time out to wish fans and followers well on the holiday. Some, like that of former President Barack Obama, were more meaningful to the public than others, however. In fact, Obama's Easter message was exactly what Twitter needed to see on Sunday.

On Sunday, Obama carved out a moment to send a celebratory tweet about Easter to his followers. In it, he wished "all who celebrate" a happy Easter from himself and his family. The former president also asked followers to "recommit to love and serve our brothers and sisters, especially those in need." Obama concluded his Twitter message with a wish that all who were celebrating and saw his post should "Have a great day." The tweet included an adorable photo of himself, former first lady Michelle Obama, daughters Sasha and Malia Obama, and the family's dogs Bo and Sunny. The family can be seen standing before a cherry blossom tree in full bloom, all smiles. Obama is pictured wearing a gray suit with a lavender tie while the women in his family are all wearing different colorful dresses. The former president has his arm around Michelle, 55, and his younger daughter, while the former first lady has her hand in his and her other arm around older daughter Malia.

Obama's tweet was retweeted more than 19,000 times and favorited more than 170,000 times. It also received a number of replies, many of which were pleading with the former president to come back. Several fans shared GIFs of people crying, expressing their sadness over the fact that Obama is no longer in the White House. Others simply wished Obama and his family a happy Easter in return. One Twitter user wrote, "Happy Easter to our last legitimate president!" Another joked, "I wish your presidency would resurrect." Others just asked that he "please come back."

Obama does not tweet often — at least in comparison to Donald Trump — but when he does fans appreciate it. He sometimes returns to the social media platform to condemn terrorist attacks or address other tragedies. Prior to his Easter message he posted about the bombings in Sri Lanka that left more than 200 dead. Other times he returns to Twitter to celebrate joyous things, like Tiger Woods' historic win in the Masters. Whatever he tweets, followers are grateful for his insights.

Since he left office in 2016, Obama's supporters have been eager to see him back in politics in some way. While he can't run for president again, he has been involved in other campaigns, showing support for Hillary Clinton during her big for the presidency; according to Vanity Fair, he could be a major player in the 2020 election. The outlet pegged Obama as a potential "kingmaker" in the upcoming election, suggesting that whomever he decides to put his support behind on the campaign trail would have a good chance of getting elected.

The reaction to Obama's Easter message, along with his other tweets, is totally relatable. Obama's Twitter messages are always a pleasant surprise. I, like many of his fans, look forward to updates from him and his family, especially the sweet photos of them all together. It's always nice to recall simpler times, when tan suits were the most of our worries.