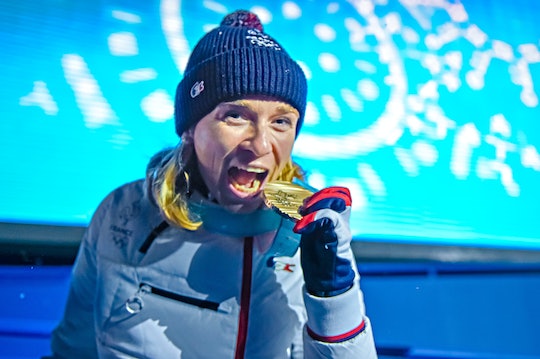 Here's What An Olympic Bronze Medal Is Usually Worth

For athletes who head to the Olympics, taking home a medal — regardless of whether it's gold, silver, or bronze — is an accomplishment that has cost them years of hard work and dedication. But for those placing third, what is an Olympic bronze medal worth? If we were to quantify all those years of sacrifice, just how much would it actually add up to in dollars?

It depends how you look at it, really. If you were to try and sell a bronze medal as scrap metal, TIME estimates that you would only get a pithy $3.50 for your efforts, since the bronze metal is made of a copper alloy. (CBS's estimate from 2012 was similarly low, placing a bronze medal's worth at $4.70.) To compare, the gold and silver medals' worth as scrap metal this year would be an estimated $577 and $320, respectively, according to TIME.

Clearly, if athletes were in it for the grand prize of the medals alone, training for the Olympics would be an ill-advised investment on their part. However, medals' auctioning price should serve as a marker of the medals' symbolic value: the price of a Winter Olympics medal generally ranges from around $10,000 (for a bronze medal) to over $30,000 (for gold) when auctioned, according to USA Today.

Of course, the more famous the athlete and the more outstanding the event, the pricier the auctioned medal. One of track and field star Jesse Owens' 1936 gold medals sold for a record-breaking $1.47 million in 2013 to a millionaire with plans to create an educational tour around the historic memorabilia. Owens not only broke five world records within 45 minutes at the Berlin Games in 1935, but he did so under the watchful eye of Adolf Hitler, who hoped the Olympic Games would prove the Aryan race's superiority. Owens, an African-American runner, took home four gold medals and proved Hitler decidedly wrong.

"Everybody who calls me and says, 'I want to sell a medal' and I give them a quote of what medals usually bring — they are totally disappointed," Ingrid O'Neil, who's been auctioning Olympic gear for almost four years, told USA Today in 2014. "They can't believe it. They think, 'OK, Jesse Owens' medal went for $1.4 million, mine should be worth at least $200,000 or $300,000.'"

Unfortunately, that's simply not the case. But, of course, the sad truth of a medal's scrap metal or auctioning price doesn't mean that Olympic medals are without value. It's simply that their value is rather intangible, rather something that comes with a fixed price tag.

Olympic athletes don't tend to earn money directly for their achievements, but rather through sponsorships and endorsements — and what they manage to bring in varies widely depending on their global standing. For instance, swimmer Michael Phelps, who easily dominated media headlines every time he competed, is reportedly worth some $55 million. Companies continue to shell out big bucks to get him to share sponsored posts on social media, where millions follow him daily.

Still, a full 10,500 athletes competed in the Rio Games alone, and not all of them are raking in the publicity like Phelps or Simone Biles. According to E! News, a good number of Olympic athletes hold down jobs outside of their competitive sports, and there's even an entire program (Team USA's Athlete Career Education Program) to help get athletes jobs while they're training for the Olympics.

The rare athlete who snags gold, silver, or bronze, can also expect a nice cash prize from the U.S. Olympic Committee, which gives winning athletes $25,000, $15,000, and $10,000 respectively. Other countries' prizes for winning athletes vary, with Russia reportedly paying gold athletes up to $135,000 in 2012.

Becoming a pro athlete is an expensive ordeal, and the field really only rewards a select few generously. If you have Olympic dreams, that's fantastic — but don't get into it thinking that your bronze medal may someday be worth millions.