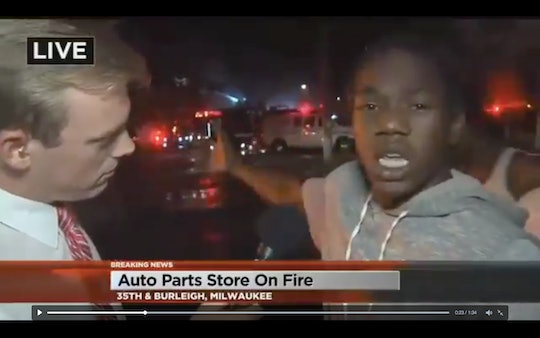 After an armed 23-year-old was shot and killed by police after fleeing a traffic stop on Saturday, Milwaukee residents turned to protests and rioting throughout the weekend, leaving its mayor calling for peace in the city as businesses were lit on fire and police cars' windows were smashed. Yet even after this weekend's riots winds down, the city's issues will be far from over — and one man's statement on the Milwaukee riots explains why Milwaukee's problem goes much deeper than this one incident.

After Sylville K. Smith, 23, was shot, his brother spoke to CBS about the protests in an interview that has since gone viral. When the CBS newscaster pointed out the destruction of local businesses and asked Smith, "What's it going to take for you guys to be okay tonight and to stop this chaos?" Smith responded with an accurate — and angry and devastating — answer that delved into the heart of the problem:

The riots in Milwaukee are not a standalone issue that can be solved by bringing in the National Guard. Body cameras are not a sufficient deterrent — the officer who killed Smith on Saturday was wearing one. The problems that plague Milwaukee go much deeper than a single police killing or a night of violent riots, and as the United States' most segregated urban area, the city has a lot to teach the United States about the problems that have led to the country's current racial tension.

According to the The Toronto Star, a city as divided as Milwaukee leaves black people at a distinct disadvantage. The city has the largest employment gap between black and white people in the country. It's home to the second-largest gap in black and white poverty rates. Incarceration rates are incredibly skewed (black males are incarcerated at ten times the rate white males are). Predominantly black neighborhoods have less access to transportation and are often shut out of loans and mortgages despite qualifying for them financially.

These inequalities between races in Milwaukee are both a cause and a symptom, and before people can expect black people to "be okay ... and stop this chaos," there needs to be significant change in the city. You can't ask for peace from a community that has been shut out of opportunities, subjected to problematic transit, school, and housing options, and experienced systemic racism.

"This community of Milwaukee, Wisconsin, has become the worst place to live for African Americans in the entire country," city alderman Khalif Rainey told CNN. "No one can deny the fact that there are problems, racial problems in Milwaukee, Wisconsin, that need to be rectified. ... The black people of Milwaukee are tired, they are tired of living under this oppression, this is their life."

As Smith's brother aptly pointed out, you can't ask a city to change in one night. You can't ask a community to stop rioting, when the riots are simply a side effect of a lifetime of oppression. Milwaukee can treat the weekend's riots by bringing in the National Guard and stamping out the protests, but that's simply a Band-Aid that will mask a much deeper problem that will require much more work to eradicate from Milwaukee.