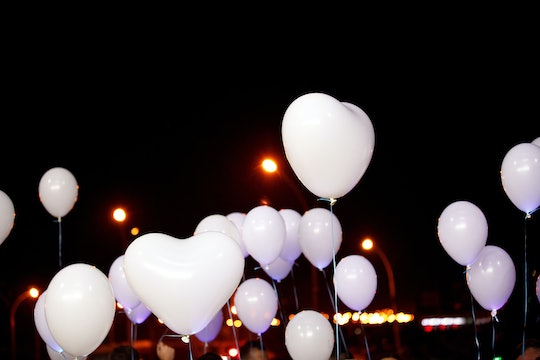 Few things in life are more awkward than middle school dances. I mean, seriously. You've got a bunch of pre-/barely- pubescent kids gathered together in a stuffy room. Music is playing and expectations are high. Who will have enough courage to ask someone to dance? And will that lucky person accept, or will it be a lesson in handling public rejection with grace? For one school in Utah, a reported dance policy aims to spare kids' feelings from rejection. However, one mom is outraged after her daughter's school allegedly told students they can't say no when asked to dance, as local news affiliate Fox 13 reported.

As of Monday morning, Superintendent Jeff Stephens for Weber School District in Utah told Romper that the policy has been nixed. "I was not aware of the practice," he told Romper. "We met with the principal this morning and made adjustments moving forward. That will no longer be the practice."

On Feb. 8, Fox 13 reported that mom Natalie Richard thought her daughter was mistaken when the sixth-grader told her she wasn't allowed to say "no" at an upcoming Valentine's Day dance at Kanesville Elementary School in Utah. The concerned mother asked her daughter's school district about the reported rule, which confirmed it. According to the New York Post, her daughter's teacher told Richard that students have "to say yes" and have "to accept such a proposal."

Evidently, the now-nixed policy was an attempt by the school to teach kids to be inclusive and about respecting each other, as Weber School District spokesperson Lane Findlay told Rawstory.com. “Please be respectful, be polite," Findlay said. "We want to promote kindness, and so we want you to say yes when someone asks you to dance.

Although Richard said she understood the motivation behind the former policy, she expressed that it was still misguided. “I do see it from their perspective when it comes to that, but there are many other ways to teach children how to be accepting than with a social dance,” Richard told ABC 13.

It's worth noting this Valentine's Day dance is completely voluntary. As Rawstory.com reported, students are instructed to select five people with whom they'd like to dance and to fill out a card before the dance. And if students feel uncomfortable with someone in particular, they are advised to speak up.

“If there is an issue, if there’s students that are uncomfortable or have a problem with another student, I mean that's certainly something that can be addressed with that student and parents,” Findlay told Fox 13.

The school's principal — per Richard's request — did eventually agree to send out permission slips to parents with the details of the dance instructions, Rawstory.com reported. That way, at least parents would be aware of the now-defunct policy. Still, Richard was worried about the overall message being sent to young kids about consent, as she told Fox 13:

Psychologically, my daughter keeps coming to me and saying I can’t say "no" to a boy. That’s the message kids are getting.

Now the policy has been changed, it seems as though this mother's outrage and concerns has resonated with the school's staff and things will be much different moving forward when it comes to future school dances, including this one.