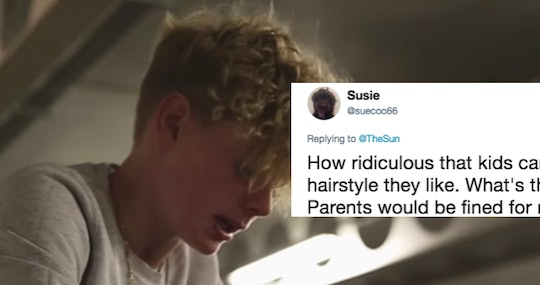 When I was in school, things like jeans with holes, flip flops, and boys having facial hair were all things deemed to be inappropriate by the school board, and thus banned. And it seems as though some schools still take strict dress codes very seriously. Yes, one school is reportedly banning this popular haircut over in the United Kingdom and people are really not happy about it, and for good reason.

The haircut in question is so trendy it has a name. It's called the.... drumroll please... "Meet Me At McDonald's." Confusing, right? The haircut, usually worn by young boys, is super popular in the United Kingdom right now. As The Independent put it, the style is somewhat reminiscent of days of the past. "The trendy, 80s-inspired hairstyle typically features short sides with a floppy, tousled mop of hair on top," the publication reported. But one school is making headlines because it's reportedly not on board with the popular 'do.

Great Yarmouth Charter Academy in Norfolk allegedly sent parents a letter warning them that students with the haircut would be sent home, according to Refinery 29. "Any child whose hair has not been restyled appropriately by Monday 26th February will either be sent home to have their hair restyled or placed in isolation until their hair is restyled,” the letter read, according to The Independent.

Romper's request for comment from the school was not immediately returned. However, as The Independent reported, the reasoning for the haircut ban seems to lie in the school's idea that it is "unacceptable" for young boys. Per The Independent, the list of boys' hair styles reportedly banned by the school included in the letter sent to parents noted:

As such, parents with children who attend the school as well as observers have taken to social media to express their outrage at the new rule.

"How bloody ridiculous...you can't take time off sick as it affects your education...but they will happily send you home because they don't like your hair style..." one person commented on Facebook, where images of the letter were shared by parents, per The Independent.

"WHAT?!?! If a kid wants his hair like that it’s his choice.... Has absolutely no bearing on his learning or anything for that matter!" one parent added in the comments. "My 9 year old son has awesome long hair, is that on your dictator list too, pathetic! Honestly what is the world coming to."

Yet another wrote, "Should ban the principal for being culturally insensitive- 'Mohican' style?! Ok for girls?! Who says that? Don’t fear haircuts, people, fear mediocre white men."

Adding to the story's intrigue is what British tabloid, The Sun, has reported on it. According to the publication, the inspiration behind the "Meet me at McDonald's" hair style is a 13-year-old rapper named Little T. As The Sun reported, "rather than getting excluded for listening to T's shocking lyrics at school, kids are getting kicked out for copying his iconic haircut."

But according to Little T, the haircut isn't even called "Meet me at McDonald's," but rather, "the Little T cut," according to the rapper's interview with The Sun. Little T also told the publication after the ban that kids should "keep doing it," in reference to copying his hair style.

However, students might not want to heed the advice of Little T, as the school doesn't appear to have changed its mind on the controversial policy in spite of this backlash.