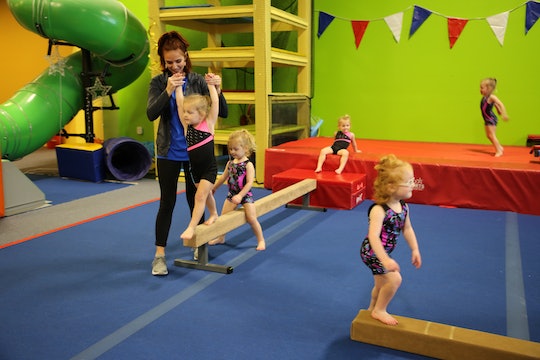 It's A Big Season For The Busby Quints On 'OutDaughtered'

Adam and Danielle Busby definitely have their hands full on OutDaughtered: they're busy taking care of oldest daughter Blayke as well as their quintuplets, Olivia, Ava, Hazel, Parker, and Riley. That would be difficult enough without the myriad everyday obstacles that get in the way — and are even harder to navigate with six little ones. After a brief hiatus, OutDaughtered Season 6 premieres on TLC on Oct. 1, starting off a whole new season of Busby adventures.

The season begins with a series of birthdays. In "Fournado Warning," Blayke turns eight shortly before the quints turn four, with all six special days taking place within a single week. Adam and Danielle have to contend with the tiny energy tornados living in their house (hence the title), and that energy only increases the older the girls get. Meanwhile, Riley begins Pre-K while Hazel adjusts to new glasses, and Danielle deals with some stress over Adam's new job. Career opportunities appear to be playing a big part in the season, because Episode 2, "Veggies...Ewww!" concern jobs, too. Danielle will be starting a new business, on top of her and Adam's joint venture to get the girls to eat healthier. They also get some news about their house.

The Busbys' house troubles began in Season 5 when they learned there was mold in their home. That led them to a search for somewhere new to reside for six months while the situation was straightened out. Viewers saw how frustrating it was to search for a new house, because most of the options didn't have room for such a big family, or the amenities the Busbys needed. And it seems like the news they get in Episode 2 won't be the most promising.

In July 2019, Danielle spoke to Good Housekeeping about the state of their home, explaining that they were still living elsewhere while the mold problem persisted. She described it as a "work in progress," but didn't seem too disappointed in their temporary home. Though she missed her massive kitchen, she was a fan of the house's pool and yard, which gave the girls plenty of space to roam around.

The girls' birthdays are in April, so that must have been when Episode 1 was filmed; it follows that Episode 2 was filmed at the same time, or shortly afterwards. That would be around the time Danielle gave Good Housekeeping an update, so it seems like the Episode 2 news isn't going to give the Busbys the go-ahead to return home.

While the housing dilemma is an ongoing issue, it won't be the only thing the Busbys have to deal with in Season 6. As the girls get older, the family will have to learn to navigate all manner of hurdles. But they'll handle them like they always do, and make the best of whatever arises. A birthday celebration is a good way to start Season 6 on a positive note and set the tone for everything that follows.

More Like This
Take An Exclusive Sneak Peek At 'Bluey' Season 3 Before It Lands On Disney+
The White Lotus Is The Perfect Thrilling Treat For After The Kids Go To Bed
The Worst Fake Babies In The History Of Movies & TV
10 Cozy, Romantic, & Drama-Filled Shows To Watch If You Love 'Virgin River'