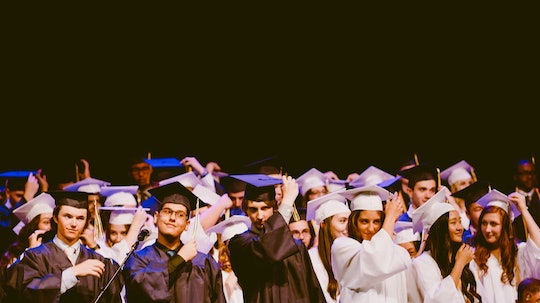 Parents Are Saving More College Funds For Their Sons Than Daughters, Research Suggests

Parenting preferences aside, a major goal is to raise young kids with every possible opportunity, right? Well, this principle doesn't seem to apply to financial investments as recent research, as reported by the Wall Street Journal, has found that parents are saving more college funds for their sons than their daughters, showing that mom and dad aren't really setting their girls up for success.

Regardless of opinions on the validity of the wage gap, providing less funding for schooling absolutely inhibits girls from reaching their full potential later on. The research goes to show, whether consciously or subconsciously, boys' educations are more valued.

Roger Young, a senior financial planner for T. Rowe Price told CNBC that the study contributes "to the body of literature of gender issues in society." "Looking at the breadth of the results suggests there are some antiquated viewpoints on gender out there," Young explained to CNBC.

Certainly, the idea that women should attend college isn't a new one, given that women outnumber men in colleges, but that parental, financial support just isn't there. As another study (by the student-loan marketplace LendEDU) found, of 1,400 college graduates surveyed, 6 percent of women reported their parents paying for a majority of their college education, compared to 10 percent of men. Additionally, 50 percent of women reported that their parents didn't contribute anything financially to their college funds, compared to 43 percent of men.

Another significant takeaway from these findings? Parents of all girls appeared to be more concerned about costs and debts of college, considering lower-priced institutions for their girls' schooling. This, one can assume, is for the sake of the family's overall, long-term financial health, which isn't necessarily a bad thing. But, that still doesn't detract from the fact that parents of all boys seem to be more willing to invest larger sums of money into their educations.

And, unfortunately, the gender bias doesn't stop there. Dads reported being more willing to invest greater sums into their boys' educations than mothers of all boys were, according to the study. As Forbes reported, 33 percent of fathers "are willing to take on $75,000 or more in college debt for their kids than moms of all boys," who come in at just 14 percent.

To be clear, these studies don't show that parents spend less on girls versus boys in the same household; instead they highlight a trend shown across different families. Still, “given that more girls are attending college and graduating now, that doesn’t make a whole lot of sense," Young told Forbes. "Certainly, the world has changed so that two-income households are kind of the norm, so those things don’t seem logical," he added.

So what are the solutions to a problem of this magnitude? For one, admitting that inequality exists and committing to changing it. “Parents should give a good hard look and make sure they are treating their children fairly and recognizing the potential of both their boys and their girls," Young told the outlet.

In assuming that an education will be more "worthwhile" for a boy, this puts young girls at a disadvantage, not only when they're applying to colleges, but even earlier than that. Just operating on that flimsy assumption sends a message that, regardless of effort on their part, girls aren't "worth" the same amount as boys are — which couldn't be further from the truth.