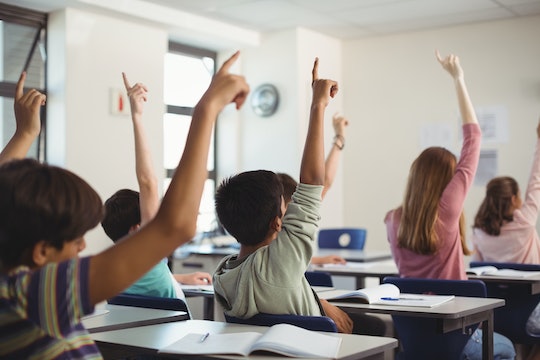 There's no doubt that when it comes to history, the stories — and accomplishments — of those on the margins of society are often downplayed, if not omitted entirely. As the saying goes: the story of our past is often written solely from the perspective of those in the position to sell the books. Despite how much progress it seems we have made on the front of social equality and justice, some parents are opposing LGBTQ+ curriculum at a school district in California, going so far as to pull their kids from school because of it. And it's a stark reminder of just how far we still have to go.

Last week, a Rocklin County school district, near Sacramento, voted 3-2 in a board meeting to include the accomplishments of the LGBTQ+ community in the curriculum in their early grade schools, according to FOX 40. What would seem on the surface as a net positive for inclusivity and more thorough education has resulted in a very unfortunate backlash.

According to KTXL, 700 students have either been pulled from classes as of last Friday, or their parents are considering taking them out of the district altogether. There are a total of 12,000 students at the schools in question, according to FOX 40. Romper has reached out to the school district for comment and is awaiting a reply.

The drop-outs are reportedly being done in protest of the scholastic amendments, but the reaction is short-sighted at best.

First, it rests on the supposition that exposure to history and information about the LGBTQ+ community would somehow influence children to be in it, though that presumes that non-binary gender and sexuality is a choice one makes, as opposed to an intrinsic truth that they can either accept or deny.

In addition, research shows that inclusive education has significantly positive results for schooling as a whole. According to FairClassrooms, curriculum that includes LGBTQ+ material has shown to decrease overall bullying at school by 15 percent. In addition to this, whether some people like it or not, LGBTQ+ history is a big part of our culture and our society. With same-sex marriage being legal in many parts of the country, it's irresponsible to deny the legitimacy of the lives of those around us.

"I know the importance of this inclusive curriculum from both a personal and professional perspective," Sacramento LGBT Community Center spokeswoman and Rocklin resident Rachel Henry said in regard to the backlash, The Advocate reported. "There are several empirical studies that show textbook curriculum that is explicitly inclusive of the LGBTQ+ has dramatically positive effects on school climate for both LGBTQ+ and non-LGBTQ+ students. Students of marginalized groups, such as the LGBTQ+ community, have a right to see themselves reflected in the history that they study."

It is unfortunate that we are still at a place in which including the history of previously marginalized communities is in some way threatening to those not within them. Hopefully we will progress to a point where we realize that obstructing our children's ability to have a fuller and more realistic picture of the world as it is truly does not benefit anyone.

More Like This
Dads Share What Paid Family Leave Would Mean To Them In Heartwarming Video
Exclusive Eureka! Clip Introduces Star Of Disney’s New STEAM Preschool Series
How Title IX Changed The World For Girls
The Covid Vaccine For Kids Under 5 Has Been Sent To The FDA For Review