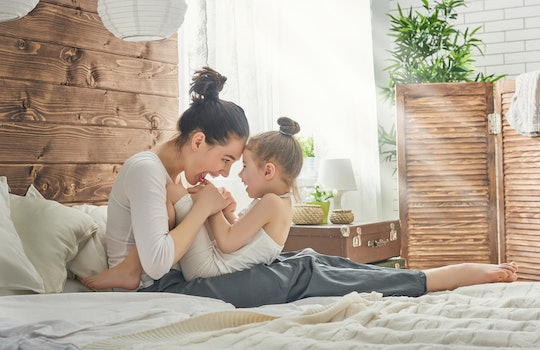 I am my mom's favorite child. Don't ask my two brothers or tell anyone I said that, but I sort of think I am. OK, maybe not her favorite. But I think she sort of gets me better than she gets my brothers. According to a recent study, this could be on account of the fact that we're both women. The researchers looked at spending habits, and found that parents tend to spend more on their child based on their own gender when looking at buying gifts.

The study published in the Journal of Consumer Psychology utilized several different experiments to test spending habits of parents, particularly their subconscious choices when it comes to the child of their own gender. In one experiment, participating parents were told they would receive one treasury bond worth $25, and needed to choose which one of their children would receive it. Mothers almost always chose their daughters, while fathers overwhelmingly chose their sons. According to researcher Kristina Durante, a professor of marketing at Rutgers Business School in New Jersey, the gender bias was seen across in each of the experiments and didn't appear to be culturally motivated. According to a press release in Science Daily, she explained:

We found that the effect was very robust in four different experiments and across cultures. The bias toward investing in same-gendered children occurs because women identify more with and see themselves in their daughters, and the same goes for men and sons.

The gender bias continued through the study; when participants were filling out the original survey, they were given a raffle ticket with the chance to win a backpack for their son or daughter. A full 75 percent of mothers chose a backpack for their daughters, while 87 percent of fathers chose the backpack for their sons. What was perhaps most interesting during the study was how unwittingly each parent favored the child of their own gender; when initially asked if they had a "favorite," 90 percent of respondents indicated they did not. As Lambrianos Nikiforidis, an assistant professor of marketing at the State University of New York explained to The Daily Mail:

Although the idea that parents might play favorites is not new—we’ve all heard adages such as “like father, like son” or “daddy’s girl”—most parents strongly deny favoring one child over the other. Even though parents say they do not have a favorite, they also admit they do not actively track investment in each child, which leaves room for bias.

While a little favoritism (an extra treat, a small gift) might not be cause for a terrible amount of concern, Rutgers researcher Kristina Durante told Parents that a subconscious gender bias could spell trouble down the road.

"If this gender bias influences decisions related to charitable giving, college savings, promotions and politics, then it can have profound implications and is something we can potentially correct going forward," she told the outlet.

How does one correct playing favorites? Possibly a strong first step might be getting real with yourself. It's a knee-jerk reaction of most parents to deny any sort of bias when it comes to their children, the reality is that human beings are creatures who look for commonality as a means of bonding. And gender is a strong common thread. As the study's researchers noted, according to Babble:

Gift giving to one’s children can be a way for parents to bolster their sense of identity and live vicariously through their children.

Which parent hasn't bought a gift for their kid because they remembered playing with something similar themselves as a child? Gender bias happens, so don't beat yourself up for it. Try to self-correct; instead of pretending it's not a thing, acknowledge it and amend it. Pay attention to the way you invest in each of your children.

Sure, you might secretly relate to one child more than your others. But don't let it affect they way you invest your love, your time, or your money.

More Like This
Jennifer Lopez Is Being Praised After Introducing Her Child With Gender Neutral Pronouns
Way Too Many Parents Have Zero Plans to Talk About Sex With Their Kids
Obamas Issue Powerful Statements After Supreme Court Ends Roe v. Wade
Viral TikTok Breaks Down How Beautifully Bluey Depicts One Character’s Infertility