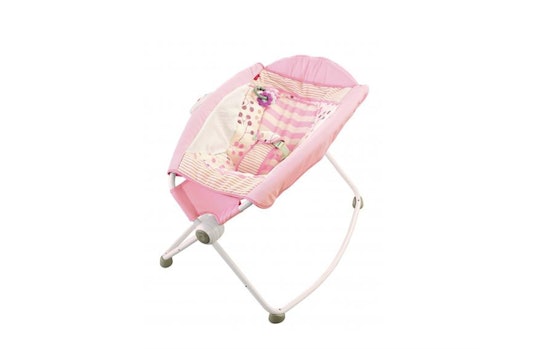 Following numerous reports of infants rolling over and dying in a popular baby product, the U.S. Consumer Product Safety Commission (CPSC) and Fisher-Price issued a joint statement warning parents not to use the Fisher-Price Rock ‘n Play after infants reach 3 months old, according to a report released on Friday, April 5. The CPSC said in a statement that is aware of 10 infant deaths that have occurred since 2015 while using the Fisher-Price Rock n' Play, noting that infants had rolled over from their backs to their stomachs or side, "while unrestrained" in the seat.

"According to medical literature, infants typically begin rollover behaviors at 3 months," the CPSC said in a statement on Friday, adding that all 10 infant deaths were 3 months old or older. "Because deaths continue to occur, CPSC is recommending consumers stop use of the product by three months of age, or as soon as an infant exhibits rollover capabilities."

Fisher-Price did not immediately respond to Romper's request for further comment regarding the new warning, but the company did issue a statement on its website, also noting that it "warns parents and caregivers to discontinue use of the Rock ‘n Play Sleeper when infants begin to roll over." According to pediatrician Juan Carlos Millon, who previously spoke to TODAY, not about this product warning, "most babies will start to roll anywhere from the end of their third month to the fifth month."

Fisher-Price said in its statement, "In keeping with that trust, the Rock ‘n Play Sleeper meets all applicable safety standards, including those of the international standards organization, known as ASTM International, and is certified by the Juvenile Products Manufacturing Association (JPMA)," adding that Fisher-Price products come with instructions on how to use them "on the front of the product packaging, in the product instructions, and on our website."

In a statement to CNN regarding the new warning, Chuck Scothon, general manager at Fisher-Price, said, "a child fatality is an unimaginable tragedy... Fisher-Price and every one of our employees take the responsibility of being part of your family seriously, and we are committed to earning that trust every day."

On Twitter, the CPSC and Fisher-Price issued a reminder to "consumers to always create a safe sleep environment for infants: Never add blankets, pillows, stuffed toys, or other items to a baby’s sleep space and always place infants to sleep on their backs."

The American Academy of Pediatrics has similar advice for parents regarding safe sleep practices for infants, such as placing the baby on their back while they sleep, including naps, using a firm surface, and keeping "loose bedding out of the baby’s sleep area."

Beyond utilizing this warning, if parents have any questions or concerns about safe sleep practices or how to safely use a product with your baby, always reach out to your pediatrician or a medical professional for guidance.