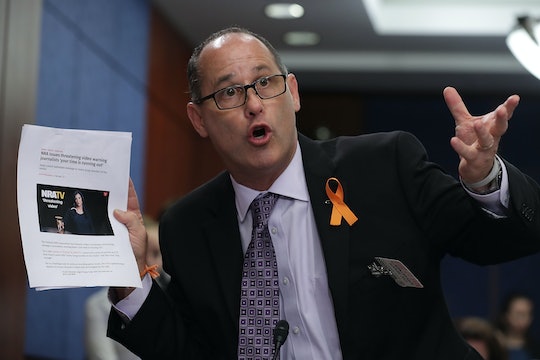 After a longer-than-anticipated government shut down, Trump is poised to finally give his State of the Union Address tonight in front of Congress, and millions of Americans will be tuning in to hear what he has to say. But potentially even more noteworthy that anything Trump has to say is who will be in attendance at tonight's address. And with gun control being a hot button issue for many, the choice says a lot about where the nation's concerns lie. Parkland parents will attend Trump's State of the Union Address and all eyes will be on future policy change.

Their attendance comes just a few days before the Feb. 14 anniversary of the mass shooting at Marjory Stoneman Douglas High School. Seventeen people were killed and many more were injured in the attack, according to the Miami Herald.

Three Parkland parents, each of whom lost children in the shooting, will attend the State of the Union address, as well as one student survivor, according to the South Florida Sun Sentinel. The hope is that their presence will remind that nation of the devastating of toll mass shootings and the need for stronger gun control measures.

This comes in anticipation of a congressional hearing on Wednesday to discuss gun violence prevention — the first in nearly a decade, Representative Mike Thompson, a Democrat from California, who chairs the Gun Violence Prevention Task Force said, according to the Sun Sentinel.

The first invitation came from House Speaker Nancy Pelosi, who drew drew attention to the issue by inviting Parkland parent Fred Guttenberg as her guest to the State of the Union address. Guttenberg, who lost his daughter Jaime in the shooting, is calling for stronger gun control measures, a ban on high capacity magazines, and universal background checks, according to Mother Jones.

"I am horribly depressed as to why I am there," Guttenberg said, according to the Sun Sentinel. "I can't remove that reality that I am there because my daughter isn't here with me. We should be sitting on a couch watching this together."

Guttenberg famously attempted to shake Brett Kavanaugh's hand at the now-Supreme Court justice's Senate Judiciary hearing and was denied, according to NBCNews.

Showing that this is not just a cause for Democrats, Republican Senator Rick Scott invited Andrew Pollack who lost his 18-year-old daughter in the shooting, according to The Hill. Scott has worked closely with Pollack on gun legislation, including raising the age at which you're allowed to buy a gun in Florida from 18 to 21, along with allocating $400 million for school safety programs, per the Sun Sentinel.

Parkland parent Manuel Oliver will attend on the invitation from Democratic Representative Ted Deutch, according to The Hill. Oliver is the founder of Change the Ref, a gun violence advocacy group that he and his wife founded in remembrance of their son who was killed during the Stoneman Douglas massacre.

One of the most politically visible Parkland survivors will also attend — Cameron Kasky, a co-founder for the March for Our Lives movement. His invitation came from Representative Eric Swalwell, a Democrat from California, according to CBS's San Francisco affiliate.

The time for action on gun violence is now, according to Deutch, who represents the district in which the school is located.

"For these young people, this is their Vietnam," he said, according to the Sun Sentinel. "They are tired of watching their friends and classmates die."

Parkland survivor, Aalayah Eastmond is slated to speak at Wednesday's hearing and wants Congress to know that it's not just survivors of mass shootings that are victims, but those that are the target of gun violence on the streets of many of the nation's cities. She told the Sun Sentinel:

Everywhere I go I think it is going to happen again. I could be in the safest place and think it will happen. I plan what I would do in my own room. It literally happens everywhere, and I feel there is no such thing as a safe place anywhere. The PTSD is real. The trauma is real. It's something I'll have to deal with for the rest of my life.

In 2018, the United States saw a total of 14,657 gun deaths, 340 of which were classified as the result of mass shootings, according to The Gun Violence Archive.

This year, the mass shooting count is already at 31 and the nation is only two months into the year. So, clearly something has to be done.

Although Trump was scheduled to give his State of the Union address in late January, Pelosi rescinded her invitation to Trump to speak before Congress while the government shutdown was still in place, according to Vanity Fair. Now that everyone is (at least temporarily) back to work, things are moving forward.

Trump is poised to give his speech to the American public on Tuesday, at 9 p.m. EST on all major networks, including online via The White House website, according to The New York Times.

It still remains to be seen if Trump will make gun policy a highlight of his State of the Union address. But the American people will be watching how he responds as survivors and parents urge Congress to make changes that have the potential to save hundreds of lives.