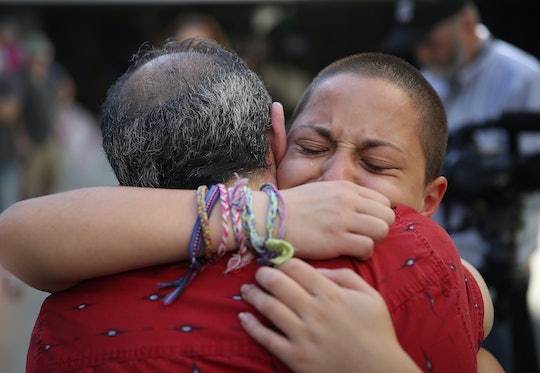 Sometimes adults need kids to show them the way. We get mired down in disappointment, overwhelmed by our checklists and our chores and our millions of runs to the grocery story. We get complacent. We forget to be angry about all of the things that are wrong in this world. Because we're tired. And then along comes a kid, angry and vocal and just right about everything. When you see this video of a Parkland student schooling adults on gun control, you'll understand why the internet is bowing down at her feet. She put into words all of those things adults have forgotten, the awful truths and preventable wrongs we are supposed to be doing something about.

In the wake of the school shooting by a lone gunman at Marjory Stoneman Douglas High School in Parkland, Florida on Wednesday, vigils are being held across the state. In front of the school itself on Thursday, to remember the 17 lives lost in a preventable tragedy, and another rally in Fort Lauderdale, Florida on Saturday morning. While the vigil on Thursday was understandably one of mourning and loss, the rally on Saturday had a different note. An edge, an anger, a frustration borne of too many tragedies and less to nothing done to stem the tide.

And one person in particular embodied that sea change; a young student from Marjory Stoneman Douglas named Emma Gonzalez.

Gonzalez stepped up to the podium to speak in front of hundreds of people at the gun control rally, and she made her feelings about the National Rifle Association, President Trump, and school shootings patently clear. She's calling "B.S." on the lot of it:

Gonzalez wasn't pulling any punches when it came to the President of the United States either; she called President Trump out for his tweet in response to the Parkland shooting, where he appeared to lay the blame of the shooting solely at the feet of the victims for not reporting his "erratic" behavior.

We did. Time and time again. Since he was in middle school. It was no surprise to anyone who knew him to hear that he was the shooter. Those talking about how we should have not ostracized him? You didn't know this kid!

She went on to make an important point about guns, a topic Trump has been obstinately refusing to discuss:

We know that they’re claiming that there are mental health issues and I am not a psychologist but we need to pay attention to the fact that this isn’t just a mental health issue. He wouldn’t have harmed that many students with a knife! How about we stop blaming the victims for something that was the shooter’s fault?!

Finally, Gonzalez hit Trump where she believes he lives; in the pocket of the NRA:

If the president wants to come up to me and tell me to my face that it was a terrible tragedy and how it should never have happened and maintain telling us how nothing is going to be done about it, I’m going to happily ask him how much money he received from the National Rifle Association.

Emma Gonzalez is smart enough to be pissed off, and good enough to remain hopeful. She lived through something nobody should ever have to live through, and she's angry about it. But most importantly, she's channeling that anger to try to effect change. As she said in her speech, "We will be the last mass shooting."

She's woken everybody up, reminded us that we're supposed to be pissed off too.

That's the mark of a true leader. Even if she is "just" a kid.