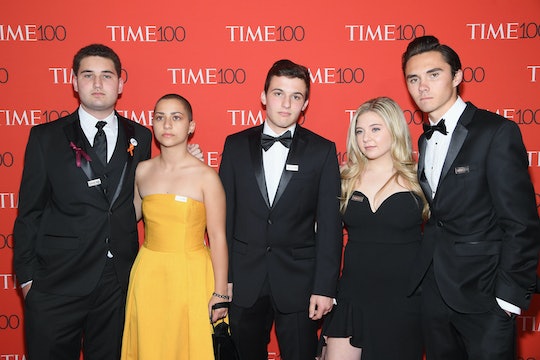 More than a full year after the horrific mass shooting at Marjory Stoneman Douglas School in Parkland, Florida, another survivor has died. On Sunday, March 16, 19-year-old Sydney Aiello took her own life after having survived the Valentine's Day shooting at her school. Despite the fact that more than a year has passed since that terrible day, it seems young Sydney never fully escaped the horror of what happened. Because the pain doesn't simply go away when the shooting stops. And now fellow Parkland survivors are paying tribute to Sydney Aiello by honoring her memory.

Sydney Aiello was a girl with a bright future. A student at Florida University, CBS Miami noted that she was a bright, positive girl who was focused on getting good grades. She was also at Marjory Stoneman Douglas School when a lone gunman opened fire, killing 17 people. While Aiello was not in the Freshman building at the time of the shooting, one of her very close friends was there. Meadow Pollack died during the shooting, and Sydney's mother Cara told the news outlet that her daughter had struggled with survivor's guilt ever since that day. Cara Aiello also noted that her daughter had been diagnosed with post-traumatic stress disorder. Sadly, she didn't open up to any of her family members in the days before she took her own life. Sydney was laid to rest on Friday.

Sydney's death has stunned those who knew her, including her friend Meadow's father Andrew Pollack. In the months since Meadow's death, Pollack has become an outspoken advocate for school safety. On Wednesday he retweeted a post featuring a picture of his daughter with Sydney that noted "a little more than a year after this picture was taken, both are gone."

Pollack's son Hunter also tweeted on Friday that it was "devastating" to bury another young woman after having already buried his young sister.

Parkland student and activist David Hogg, who was a classmate of Sydney's, shared a tribute that also included a link to a GoFundMe page started by Aiello family friends to help pay for her funeral. The campaign was asking for $20,000 but has already surpassed $64,000.

Emma Gonzalez, who became famous after delivering a blistering speech in the wake of the Parkland shooting, also retweeted the GoFundMe page.

March For Our Lives co-founder and former Parkland student Cameron Kasky shared his own beautiful message to honor Sydney's memory.

Parkland survivor Jaclyn Corin said goodbye to a "beloved daughter, sister, and friend" in her tribute to Sydney Aiello, as did fellow survivor Alex Wind.

It is difficult to find comforting words in the face of this kind of tragedy. I suppose the only thing to do moving forward is to ensure you spread the message that it's important to talk to someone if you're having problems. If you're struggling and feeling alone, you are not alone. Reach out if you need help, whether to a friend or family member. If you don't feel comfortable talking to someone close to you, call 1-800-273-8255 to reach the National Suicide Prevention Lifeline.

And know you don't have to struggle alone in the dark.