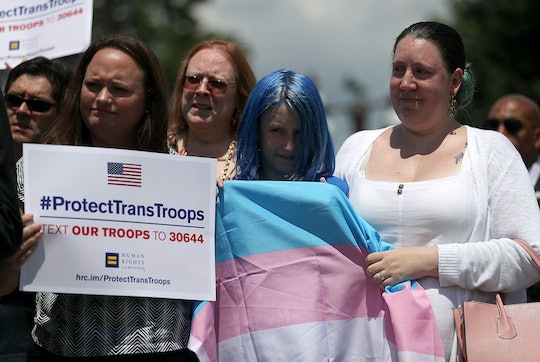 Donald Trump surprised many this July when he tweeted, seemingly out of nowhere, that after consulting with generals, the U.S. military would not allow transgender people to serve in the military. A month later, Trump issued an executive order giving Secretary of Defense Jim Mattis six months to enact the ban. While a panel that Mattis assembled looks into the effects of banning transgender service members, the Pentagon announced over the weekend that transgender service members can re-enlist in the interim.

U.S. Army Col. Rob Manning, a Department of Defense spokesman, said in a statement on Friday:

According to CNN, this is the first time that the Pentagon has addressed whether or not current service members could re-enlist while the Department of Defense reviews Trump's ban. Although after the Commander in Chief and the Department of Defense suggested they should be banned, transgender service members can't be blamed if they've lost faith. Re-enlisting is a huge gamble while Mattis and his panel completes their study.

Meanwhile, a group of senators, including John McCain Kirsten Gillibrand, Susan Collins, and Jack Reed, have introduced a bipartisan bill that would prevent the Department of Defense from banning members based on their gender alone. Earlier this year, Collins and Gillibrand had wanted to protect transgender service members by adding an amendment ot the National Defense Authorization Act, but the debate never happened because Congress couldn't agree on the order of bills to vote on. (Yes, seriously.)

So now they're attempting to block Trump's ban with a separate piece of legislation. Right now, Mattis has until February to finish his study. This bill would move the deadline to the end of the year. It would also prevent the military from kicking transgender people currently serving out of their jobs, and also reenforce the opinion that Congress believes anyone who can serve, should be able to, regardless of gender.

McCain said in a statement Friday, “Any member of the military who meets the medical and readiness standards should be allowed to serve — including those who are transgender."

Even with McCain's support, though, it's unclear whether the bill will pass in the Senate. There are a bunch of "must pass" bills on their agenda this fall — like the debt ceiling and immigration issues. Those things could push any discussion of protecting transgender troops to the back burner. However, now that McCain's on board, as the chairman of the Senate Armed Services Committee, it could be seen as more "urgent," according to The Washington Post.

It's a shame that Congress has to decide which is more important: The fate of undocumented immigrants or transgender service members' lives. Alas, the Trump administration has made that the case. This piece of legislation might be the only way to protect the rights of transgender people to serve in the military.

According to the American Civil Liberties Union, Mattis' panel is likely to come to the conclusion that Trump has already laid out for them. Calling your local representatives and telling them how you feel about the transgender military ban is essential.

According to Trump, his advisors had advised the ban because of the "burden" of paying for transgender military personnel health care, despite the fact that a transgender service member costs no more than any other member does. It wasn't until 2016 that transgender people were allowed to openly serve or 2010 when the "Don't Ask, Don't Tell" policy was repealed (that effort was also led in part by Gillibrand and Collins, BTW). Women weren't allowed in combat until just 2016.

If an executive order announced via tweet can take away the right of a transgender person to serve its country in the military, who's to say that any other group of people can't be banned eventually? Serving in the military is a choice that only the bravest Americans make. Hopefully Congress (or the Department of Defense) won't take away that right by banning the willing and capable men and women who want to serve.